The aftermarket parts are so numerous that it becomes a challenge to find the best part or accessory.  This difficulty in judging among all the offerings to find the best combination of price and quality is true even for bipods.  In this article, I will offer up my choices for the best Ruger 10/22 bipods.

First Consideration – How Will You Use a Bipod?

Before heading out to your favorite shooting store to buy a bipod for your Ruger 10/22, you should give a little thought to what you expect from the bipod.  What features you want, or need is, in many ways, dependent on what type of shooting you do.

In my book, the types of shooting that most people do that require a bipod break down into several categories.

I will discuss each category and then list out the best bipod within that category. Let’s get to it!

Let’s face the facts.  Long-range shooting when you are talking about a 22 caliber rifle is about 200 yards.

Considering that an off the shelf 22 rimfire bullet drops almost 7 ½ inches at 100 yards and a 10 mile per hour crosswind can move that same bullet 4 inches to the left or right tells the tale on competitive 22 caliber long-range shooting.

You can get involved in all the technical aspects of long-range shooting such as ballistics, bullet drop, and wind compensation at a fraction of the cost of high power big bore shooting.  You also don’t need to find a 1,000-yard range to practice.

Overall, the cost to compete is much lower.  Don’t get me wrong, you can spend as much as you want or can afford on tricking out a rifle and buying gear.  However, with a little judicious selection, your Ruger 10/22 can be just as competitive as anyone on the range.

Typically, when selecting the best bipod for a Ruger 10/22 rifle for competitive long-range shooting, weight is not a factor.  A heavier bipod may be an advantage in maintaining stability.  Adjustability is a key factor for some shooters, especially if several shooters share a single rifle. 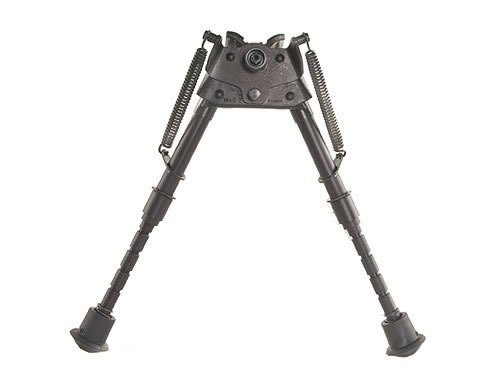 Harris has set the standard in rifle bipods for more than 50 years.  If you walk down the firing-line at a long-range rifle competition, you will find Harris bipods on most of the rifles.  The Harris bipod design has undergone very few changes in those 50 years.  Harris has the attitude that if it isn’t broke, don’t fix it.

There are several reasons that serious shooters pick Harris bipods over other brands.

Features and Specifications – Getting to the Bottom Line

If you want to get serious about long-range shooting competitions, you won’t go wrong choosing a Harris bipod.  One thing is for sure. You won’t have to replace your bipod if you decide to upgrade your rifle.  The Harris bipod will serve you well no matter what level of shooting you choose.

Many shooters find the shorter ranged competitions more to their style.  Several national and local organizations sponsor these types of matches around the US.  The rules differ among the groups.  These sorts of competitions are popular because they don’t take a lot of room to conduct. A range of 75 yards is more than enough for most of these competitions, making them adaptable to indoor ranges.

Many of these short-range competitions involve shooting from different positions.  Standing. Kneeling and prone are the usual positions used in these matches.  Some organizations allow the use of bipods when in the prone position.

The major difference in bipod selection for this type of shooting is the ease with which the bipod can be detached and re-attached to the rifle for different shooting positions.  You certainly don’t want to contend with the added weight of a bipod on the end of your rifle during a standing off-hand competition. 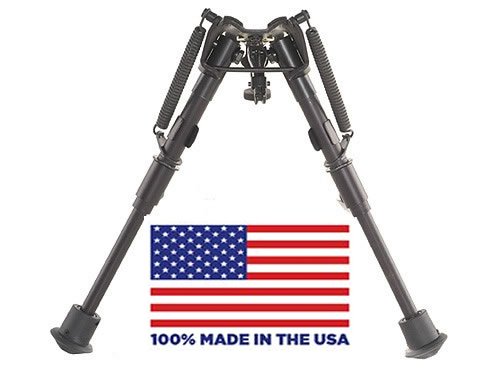 Back to Harris.  You can’t go wrong with a Harris bipod.  The HBR model lacks a few of the features of its big brother, the HBRMS but gives up nothing in the quality department.  You will see many other bipods on the market that resemble the Harris HBR bipod, but none deliver the quality of the original.

The weight savings of the Harris HBR bipod give it the advantage in the short-range competitive shooting category.   The HBR bipod weighs in at 9.8 ounces, saving almost four full ounces.  Four ounces doesn’t sound like much but when your competition rules require you to shoot your gun through the whole competition without modification, those extra four ounces can mean a lot when you are shooting off-hand while standing.

You get the same features and advantages in the HBR bipod as you do with the HBRMS bipod.

If weight is an issue in your competitive shooting world, the Harris HBR bipod should be on your list to consider.  You get the superlative Harris quality with less weight.

In the Field – When Success Means Survival

For many shooters who are also aware of the need to be prepared for unforeseen events, a rifle is necessary.  A little forethought tells you that using your defensive rifle for hunting is not a wise idea.  A rimfire 22 caliber rifle is the perfect choice for meat gathering.  Among those who are prepping, the Ruger 10/22 is the rifle of choice.

Mine is a Ruger 10/22 Takedown model.  The Takedown model breaks down for easy backpacking but gives that same Ruger 10/22 rock solid performance when assembled.  Part of my package is a scope fitted with a quick detach mount that returns to zero reliably and a bipod for steady, accurate shooting.

The goal for me is always one shot, one kill.  22 caliber ammo is still relatively inexpensive, but in a survival situation, the local gun store may not be there with shelves full of ammunition.  You can’t reload 22 rimfire ammunition, so each round that goes downrange needs to be productive.

A good bipod on your survival rifle is a must.  The most stable and accurate position from which to shoot is the prone position and a bipod adds to that precision.  I prefer a quick detach bipod for the flexibility it offers, depending on the type of shooting I am doing and the conditions I am facing. 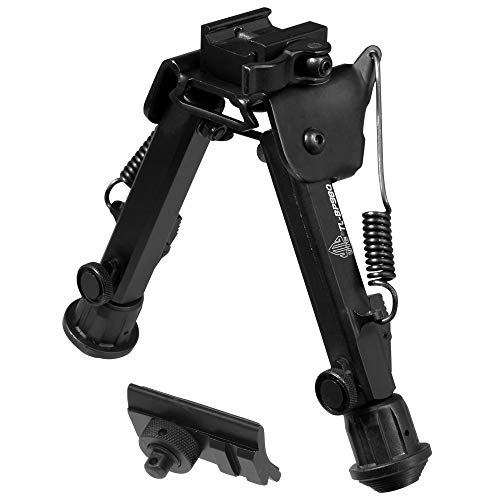 What, you say?  Not Harris Bipod?  No.  There are several reasons for picking this bipod over a Harris.

For the money, I have chosen the UTG Super Duty Bipod for my Ruger 10/22.  Looking at the features and specifications makes the reasons even clearer.

The UTG Super Duty bipod is a permanent part of my kit.  It goes everywhere my Ruger 10/22 Takedown goes.  The quick detach mount makes it easy to stow and keeps the rifle profile to a minimum for travel or hiking.

Get them Started Right – Plinking and Teaching

Competitive shooting and field shooting is certainly popular.  But for my money, the sheer enjoyment of taking a 22 caliber rifle to the range or out into the field and just plinking targets is the most popular way 22 caliber rifles are used.

A 22 caliber rifle is the best way to introduce new shooters to guns and shooting.  I believe in getting kids started early.  My kids got their introduction to shooting early in their lives and I continue that tradition with my grandchildren.  They all get regular trips to the range with Grandpa to hone their gun handling skills.

My standard Ruger 10/22 also sees a lot of use with the older grandchildren who have grown enough to fit the standard stock.  It too is fitted with a bipod.

My choice for the youngest (A three-year-old little girl) is a Chipmunk youth rifle.  These small guns are sized just for short arms and stature.  I typically set up a small table and chair, sized just for my young students.  The Chipmunk rifle has a bipod.  A bipod allows my diminutive shooters to concentrate on proper technique rather than dealing with the weight of the gun. 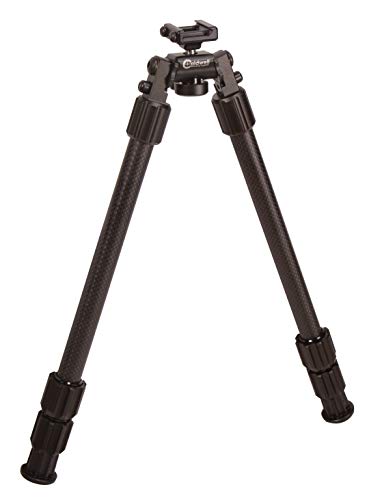 Both my standard stock Ruger 10/22 and the Chipmunk rifle of which I spoke has a Caldwell Accumax Bipod.  The Caldwell AccuMax Bipod is made with carbon fiber and is extremely lightweight.  I wanted as little weight on the rifle as possible.  Part of the instruction is proper gun handling and that means learning how to carry and a gun properly and safely.

The Caldwell Accumax rifle bipod has all the features you would expect on a quality rifle bipod.

If you are looking for a lightweight but strong bipod, the Caldwell Accumax bipod is a great choice.  It is rugged enough to stand up to field use but light enough for teaching and easy handling.

If there is one downside to the Caldwell Accumax Premium bipod, it is the price.  The bipod I put on the Chipmunk rifle for my grandkids cost almost what the rifle cost.  I know I can always use the bipod on other rifles.

Making a Choice – What Do You Need in a Bipod?

The shooting you perform is a contributing factor in choosing a bipod for your rifle.

These are the best Ruger 10/22 bipods I recommend based on the intended uses.  Remember that choosing any accessory for your rifle is a personal choice and you must decide what best fits your needs.

I hope that this article has given you some insight into choosing a bipod for your Ruger 10/22 rifle.  As always, if you have experiences, suggestions, or opinions, feel free to share them in the comment area below.  Your knowledge is valuable to this community, and we appreciate you sharing with us.