Although American Sniper is not the typical book that we review on Survival Cache or SHTFBlog, we felt that this book was good enough to break the mold of our book reviews.  As far as redeeming survival lessons in American Sniper, there are quite a few that you can gain by reading this book.  Plus this book is an action packed page turner based off of Chris Kyle’s memories of events and battlefield reports from the Iraq war.  You will also appreciate that the author goes into great detail about his fighting kit.  If you are curious as to what type of gear the SEALs carried while serving in battle and why then you will be happy to know that the author offers up details about their body armor, utility vest, packs, rifles, pistols, suppressors and scopes.

By Mark Puhaly, a contributing author to Survival Cache & SHTFBlog

When the world is full of savages, as Chris Kyle calls them, it is nice to know that rough men like the guys from SEAL Team 3 stand ready to rain down hate and discontent on our nation’s enemies.  Chris Kyle was a sniper with SEAL team 3 during the 2nd Iraq war and was credited with 160 confirmed kills and 250 probable kills, which stands as the most in US military history. Passing the likes of the legendary US Marine Corps snipers, Carlos Hathcock (93 confirmed kills) and Chuck Mawhinney (103 confirmed kills), both of which fought in the Vietnam War. Chris admits in his book, American Sniper, that it is hard to compare his kills with those of Hathcock’s because they were different wars with different technologies. Hathcock achieved his kills in a mostly jungle environment while most of Kyle’s came in the urban environments of Fallujah, Ramadi, and Sadr City.

Think all snipers love the Barrett .50 cal?  Not most SEALs snipers according to Chris Kyle. Chris and the SEALs he worked with 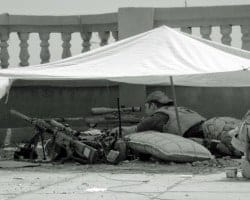 preferred the .300 Win Mag bolt action rifle similar to a standard hunting rifle or the MK-11 .308 AR-15 style rifle for most sniper engagements in Iraq.  He also carried the MK-12 from time to time in battle which was a modified AR-15 (5.56mm) rifle but according to Kyle had limited stopping power on the battlefield especially against an enemy who was often hyped up on drugs.  Contrary to the typical American notion of “Bigger is Better”, Chris Kyle was less concerned with bullet size and more concerned about recoil, noise, rifle signature, weight and follow up shots.  The urban sniper has to move around quite a bit as well, which in the case of Chris Kyle meant running from building to building under enemy observation with Marine and Army units supporting his movements.  The .50 cal was not conducive to these types of movements. Can the .50 cal stop a vehicle?  Chris’s thoughts were that if you want to stop a vehicle, shoot the driver, it will stop a lot faster.

If you think this is another SEAL book about making it through BUDs (Basic Underwater Demolition School), you would be mistaken. What I really liked about this book is that the focus was really on war.  The book covered a lot of the major battles he fought in great detail.  Before every major operation, snipers were brought in from different coalition forces around Iraq to support the infantry units moving through the cities.  That meant that Chris and the other snipers were in the hot spots almost every time.  Most of the operations detailed in American Sniper weren’t necessarily Special Forces take downs of buildings or high valued targets.  It is more about about Chris Kyle and other Navy SEAL snipers working with regular Marine and Army units as a supporting element for the ground commander to try to keep Marines and Soldiers safe by breaking up ambushes or killing IED bombers before they could kill Americans.

Chris seemed to have a knack for being in the right place at the right time to get shots.  A lot of his counter parts would get upset that every time he was on the rifle, bad guys would pop up.  So much so, that they started calling him “The Legend” by the end of his second tour in Iraq.  Chris also wanted to be out front where the action was.  He would look for key buildings with long views of over watch and then he and his team would take the building down and set up sniper hides on the top floor of the buildings or the roof which was then followed by long hours of looking through a scope at roads, cars, doors, windows and roof tops of buildings for targets in their AO (Area of Operation).  Chris had a lot of respect for the guys on the ground and that comes through in the book.  Chris especially held a deep respect for the Marines he served with in Fallujah.  During the battle for Fallujah when Chris was no longer scoring sniper kills due to a change in tactics by the enemy where they would no longer venture out into the streets.  Chris traded his sniper rifle for a M16 and started working with the Marines to clear houses and buildings.  In one case he and the Marines busted into a house full of Caucasian males with blond and brown hair taking a rest from fighting.  There was a weird exchange of looks between the two groups.  Turned out to be a group of Chechen fighters who had come to Iraq to kill Americans.  Chris and the Marines left none alive. 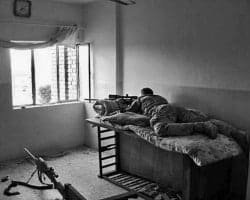 killed, I think the value you place on human life goes down quite a bit.  Some of the stories detailed in American Sniper are almost laughable until you remember that someone dies at the end of the story.  In one story, Chris was overlooking a river in Fallujah that was being used by Iraqi Fedayeen fighters to travel back and forth to the battle.  A group of men loaded up with gear brought 3 large beach balls into the river and used them as floatation devices to cross the river.  Of course, Chris called some guys over to check it out and then started shooting the beach balls.  All of the Fedayeen fighters either drown or were shot as they struggled back to the beach.  In another story, a group of men thought they were outside the range of Chris and the Army snipers he was working with and began to flip off the snipers and make obscene hand gestures. Chris used some good old Kentucky windage and popped one of the guys making hand gestures from over a mile away. Admittedly it was a lucky shot but can you imagine being one of the guy’s friends who were acting like jackasses thinking that you and your buddies were out of range and then your buddy gets shot. Talk about a funny moment that goes horribly wrong. Marcus both in BUDs and when he got word back in California that the SEAL sniper team which Marcus was with was compromised over in Afghanistan.  I have to be honest, I think “Lone Survivor” was a great book but “American Sniper” is one of the best modern war books I have ever read.  Chris Kyle might not go into the depth of detail about each fight as in the book “Lone Survivor” but he was in so many fights that the book would be an encyclopedia if he did.

American Sniper also details the stress that was put on his new wife and children during multiple combat deployments with the SEALs. I can only imagine how tough it was for his wife to give birth and then have Chris leave a few days later for a tour in Iraq. Chris’ wife Taya adds small paragraphs to each chapter detailing what was happening back home while Chris was deployed or her thoughts about events that unfolded in their lives. It gives the book a little bit of balance and you see that being a SEAL is not all about kicking in doors. You still have to mow the grass, take out the garbage as well as be a dad.

As you can expect, after seeing this much combat, Chris also saw some of his friends and brothers in arms get both killed and badly injured.  All of those deaths and injuries weighed heavily on Chris and made him even more determined to master his craft and kill more of the savages so they would not kill more Americans or the Iraqis working with the Americans.  Chris had a clear conscience about the people he killed, according to him, they all deserved to die because this was war and they were trying to kill his friends.

Chris did not have a lot of respect for the country of Iraq or most of its inhabitants. He describes in detail what a great life of raw sewage and garbage on the streets that Saddam Hussein had for his countrymen while he lived in palaces made of gold.   It makes you wonder why we as Americans spend so much blood and treasure in nation building only to have another dictator take over a shit hole after we depose the first dictator. Killing savages in this shit hole was Chris’ business and business was good.

A note from Survival Cache Team Member Scott – “I met Chris briefly during my second deployment to Iraq.  My team was taking over operational responsibility of the Al-Anbar province from his team as they prepared to head back to the US.  It was before his ’06 deployment but he had already racked up an amazing body count.  He had a well earned reputation of getting solid kills and all of the CO’s (Commanding Officers) of the Army and Marine units in the area knew who he was.   Chris was a major contributor to the US effort in Iraq and we are fortunate to be able read about some of his experiences here in this book.”

Read the Book, Then See the Movie


One thing that I can promise you about this book, you are not going to regret buying it.  Hopefully you will read it before you go see the movie.  I read Lone Survivor before I saw the movie and I am glad that I did.  Although Clint Eastwood is the director of “American Sniper”, movies are rarely as good as the books they were based on.  American Sniper was a page turner for me.  I bought it at JFK airport and almost had the whole book read by the time my flight landed back in Colorado.