“Gary,” my Grandfather admitted with tears in his eyes, “I’m going to hell.” 52 years earlier, in the Battle of New Britain, my Grandfather killed multiple Japanese combatants. The admission stunned my Dad. Growing up, he believed my Grandfather was prematurely relieved of duty due to malaria. That and little else was said of the War. The topic was taboo; any inquiries received the all too familiar chorus of, “Nothing happened to your Daddy, just a hospital bed and pills. Worry about the now.” To be fair, this was partly true. The hospital bed and pills happened but only after my Grandfather endured six months of malaria ridden brutal combat which ended in shrapnel wounds. For half a century, he privately grappled with the horrors of combat. Nobody, not even his wife, imagined the Pacific haunted him. He seemed unscathed. How could a law-abiding, humorous, hardworking father be so plagued by war?

By D-Ray a contributing author to SHTFBlog & Survival Cache

Under United States law veterans enjoy the benefits of protected class status. It is odd then that veteran care and benefits after the war have been shrouded in controversy and debate. Certainly, it is popular for politicians and the media to taut their strong support of veterans and their rights. Obama addressed post war psychological counseling in a 2010 address, “America will always be here for our veterans, just as they’ve been there for us.” President George W. Bush has also expressed similar sentiments saying, “I’m in there with [the veterans].” For many veterans, including Daniel Somers, this rhetoric means nothing. Daniel Somers killed himself in the summer of 2013. He had served in over 400 combat missions in Iraq before coming home. Coming home did not mean solace. In his suicide letter Somers noted that he was abandoned by the United States: “To force me to do these things and then participate in the ensuing cover up is more than any government has the right to demand. Then, the same government has turned around and abandoned me.” Somers is not alone, the Department of Veteran Affairs estimates 22 veterans commit suicide daily.

The Mechanisms of PTSD

Post Traumatic Stress Disorder (PTSD) is caused by a disparity in the Endocrine system, commonly referred to as a “chemical imbalance” in the brain.   This system is responsible for adjusting your hormone levels in order to react to certain stimulus, and subsequently moving your hormones back to their equilibrium state. When a traumatic event occurs, our body releases a multitude of hormones, including Cortisol, Norepinephrine, and Adrenaline. These hormones are intended to help your body react to a potentially harmful stimulus by mobilizing energy to your muscles, raising the heart rate, breathing rate, and blood pressure, and shutting down metabolic processes (digestion, immunity, reproduction). With these hormones acting in your body, you are better equipped to deal with the danger that faces you. However, in cases of PTSD, a trauma occurs that results in the Endocrine system remaining in this elevated state, and not returning to equilibrium. Prolonged exposure to the aforementioned hormones cause a multitude of issues, including depression, neurological disorders, sleep deprivation, addiction, various mental conditions, high blood pressure, ghost symptoms of other conditions, and increased probability of disease.   In addition to these symptoms that result from the heightened hormones, sufferers experience frequent flashbacks, night terrors, strong reactions to situations that remind the patient of the event, emotional shutdown, suppression, hypervigilance, and decreased attention span. In reality, PTSD can transpire from more than just combat. Situations like assault, abuse, prison, car accidents, rape, terrorism, and natural disasters can all create this perpetual chemical imbalance, and a multitude of lifelong issues.

Treatment for PTSD is limited to talk therapy and medication for the hormonal imbalances. Talk therapy consists of allowing the patient to work through the disturbing scenarios that created the issue through a process called desensitization.   This method involves the patient reiterating his/her experiences repetitively in hopes of making the memories less harmful and giving the patient the opportunity to work through their feelings that are tied to the trauma. Additionally, patients learn to deal with the effects of PTSD in everyday life through a multitude of exercises intended to help the patient keep composure during instances of heightened sensitivity. These forms of treatment are often coupled with medication in order to bring the endocrine system back to its equilibrium state.   Though helpful, these medications fail to alleviate the core issue and therefore are used in addition to the various forms of talk therapy.

Treating PTSD is not black and white. “A limitation of much of our diagnosis in psychiatry is that we base our diagnosis on the self report of our patient and have limited blood tests or scans at our disposal to make an ‘objective’ diagnosis,” notes Dr. Shaili Jain a leading psychiatrist with the VA. Incongruencies with ‘self report’ and diagnosis often create problems for the government and patients themselves. Some within the VA claim the recent uptick in PTSD diagnoses is a new breed of welfare abuse.  This sentiment has led to government hesitation in diagnosing actual PTSD cases.

Senator John Cornyn addressed the public after the 2014 Fort Hood shooting. Behind the Senator, in sprawling block letters was the inscription: “Welcome to III Corps and Fort Hood ‘The Great Place.’” The image serves as a larger symbol for the PTSD controversy facing America. It is evident to most experts that the PTSD issue is a clear and present danger to returning veterans but the government refuses to fully tackle the issue. Broken human beings are labeled as ‘fine’ and sent away. Ivan Lopez, the shooter responsible for the 2014 Fort Hood shooting was posthumously diagnosed with PTSD. According to Lieutenant General Milley, Lopez was in the process of being diagnosed with PTSD at the time of his death. The Lieutenant General said, “He was not a wounded warrior, no Purple Heart, not wounded in action in that regard.” Admittedly, Milley can not be held accountable for making callous remarks as his comments were in line with the Department of Defense. Thomas Mangan of the Rochester Independent Examiner writes, “According to the Department of Defense, the American military does not award the Purple Heart for PTSD because PTSD, ‘is not a wound intentionally caused by the enemy.’ Then who caused it? Mickey Mouse?”

See Also: Interview With a Marine

Former President George W. Bush, among others, now suggests a shift away from the attitudes of the DOD. He wants to approach PTSD with greater sensitivity. His suggestion: drop the word disorder from the acronym. The label “disorder” is given a negative connotations in today’s society.   This term is often thought to indicate a family of medical conditions the afflicted individual is partially responsible for. Though this assumption is inaccurate, it is frequently understood to be the case for many people facing issues with various disorders (ADHD, ADD, BiPolar Disorder, Eating Disorders etc.).   Those suffering from PTSD are tormented by the events that yielded their condition, and are very much victims of their circumstance. 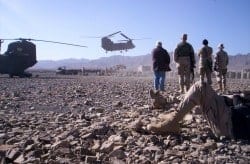 According to a nationwide survey of Afghan war veterans conducted by the Washington Post and the Kaiser Family Foundation, almost half of those surveyed claimed that as a result of their experiences at war, they have newfound difficulties in relationships, outbursts of anger, and difficulty adjusting to civilian life. While 51% of all those surveyed stated that they knew someone who had come back from war and attempted to commit suicide or unfortunately did commit suicide. One third of the veterans stated that their mental health levels were noticeably worse than before the war, and 69% feel that the average american does not understand their experience. Keep in mind, this poll is not of veterans with PTSD, this poll of veterans was taken with no screening regarding the individual’s mental health. The Department of Veterans Affairs estimates that 229,000 veterans from the Iraq and Afghanistan wars are plagued with PTSD, meaning out of the 2.8 million veterans acknowledged by IAVA (Iraq and Afghanistan Veterans Association) 1 in 9 have PTSD as a result of the war.

The war is over in the eyes of the pentagon but for many veterans the war is never over. As we enter into a new post-Afghanistan era it is important for Americans to understand veterans silently struggle at home. For them, the war continues and too many succumb to substance abuse and suicide as a result. It will be up to the newly elected President Trump to tackle the post-war legacies of Bush and Obama. Johnny Cash’s haunting words resonate well when he speaks of the tragic fate of veteran Ira Hayes, “He died drunk early one mornin’, alone in the land he fought to save.”