Axes, hatchets, and tomahawks. Cutting and chopping tools are some of the favorite gear items among outdoorsmen. That is why for this article I will be reviewing the CRKT Kangee Tomahawk (Columbia River Knife and Tool)

In case you are unfamiliar with tomahawks, or hawks as tomahawk coinsurers say, they are not as large as an ax nor are they as small as a hatchet. They are a middle-sized tool that can be used for chopping, processing game, making tools, self-defense, and for throwing. Yes, there is an entire sport centered around throwing these bad boys. With that in mind let’s go ahead and see what the Kangee has to offer. 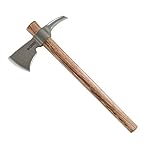 The first thing to note about the Kangee is the style. It has a cutting or chopping-edge on one side and a sharp spike on the opposite side.

The handle is made from Tennessee Hickory, is 19.13″ long, and has a clear lacquer finish that not only protects the wood but gives it a nice glossy finish.

All of this weighs in at just under 2lbs, specifically 1.98lbs. but hey who is counting?

Before purchasing the Kangee there are two things that you should know. The first is that the comes in two pieces. The head, or metal tomahawk that does all of the work, is not attached to the wood handle. More on this later.

Secondly, this model does not come with a protective sheath. I would like to say something now about this now but again, I will wait until later.

Out of The Box

I ordered the Kangee and as I stated above it comes as two separate pieces. Luckily, CRKT provides an instructional pamphlet on how to hang the tomahawk head. They are as follows.

I wasn’t a huge fan of the above process of seating the head and before testing it I decided to give everything the once over.

The first thing that I noticed was that after banging the handle roughly twenty times on a hard surface I didn’t feel all that confident in how it was seated. There was a large gap between the handle and the metal on the bottom side of the head. I could also see daylight through this gap. Not good. I banged away some more on the handle, but it didn’t fix the issue. The handle was just too tapered.

The next thing that I noticed was the beautiful handle. I loved the color and the high gloss finish. I also loved the feel of the handle but at the same time, I didn’t. It fit well in my hand, but I was worried that the smooth finish would not provide a good grip…we will see.

Given my concerns with the seating of the head, I decided to start nice and easy. First, I choked up on the handle with a close grip to the head and used it to scrape or “shave” some wood tinder. It was very comfortable in the hand and sharp enough to complete this task with ease.

Rather than using a full swing, I decided to sit on the ground and chop away at a smaller log. The cutting edge surprisingly bit very well into the wood with every swing and was easy to control.

Next, I laid I the log down and swung at in a downward motion from above.

Within a few minutes, I was able to chop through the log that was roughly five inches in diameter. The one thing that I did notice was at this point my hands were beginning to sweat and when that happened, that smooth finish on the handle was much harder to hold onto.

This caused the handle to twist and slide slightly upon impact, not allowing the head to fully bit into the wood.

The spike on the Kangee, is well, for the lack of a better word, pretty cool. It looks gnarly and ready for work. I was excited about this part of the tool.

It is hard to tell from pictures, but the spike does not have a sharp cutting edge along its length. Instead, the angles on the top and bottom form into a flatter spine until the very end. At the point of the spike, about the last half of an inch is where it comes to a sharp point and cutting edge.

2lbs. (1.98lb actually) may not seem like a lot but there is some heft to the Kangee. I lifted it and let it fall several feet under its weight and the spike dug right into a chunk of wood.

I then took some power swings and drove the spike into a hunk of wood. Each time the spike easily found its mark and did not want to come out.

With the spike dug in I began moving the handle back and forth in a prying motion to tear through the wood. It did this action wonderfully for about the first ten tries until I ran into a problem. There was suddenly a lot of play between the handle and the head when using it to pry. Meaning the head was no longer completely secured to the handle.

The bottom of the spike is slightly curved upward, making this tool great for digging, prying, breaching, and all-around tearing things apart.

Traditionally tomahawks are meant to be thrown. Unfortunately, this was one thing I did not try out. While I have thrown knives in the past, I have never thrown hawks. That coupled with not having a proper, safe area to throw it means I did not test this function out. However, I did look up several videos in which people did throw this hawk both blade and spike side forward and it appeared to work quite well.

On the side of the head with the chopping-edge, there is a small curved section cut into the bottom. This is so that if the handle breaks the head can still be used as a hand tool. This curved section allows for a more ergonomic grip when using the hawk head in this manner.

I do have two problems with the Kangee. The first is that it does not come with a sheath. Not even a cheap nylon cover. This may not bother some people, but I do not like having an edged cutting tool without some form of cover. This protects both the tool and anyone around it. If I want a sheath, I am now forced to either buy one or make one, which I find slightly annoying.

My second issue is the handle. While the smooth, glossy finish on the wood looks nice it provided little to no grip. It would probably be best to wear gloves when using this hawk. Another option I am thinking about is sanding some of the finish down to provide some grip.

My last issue with the handle is how this hawk is put together. I am no expert in tomahawks, and I realize that one of the benefits of wooden handles is that they can be replaced. But with the tapered handle as it is, I feel the head never gets properly seated and is prone to wiggling down the handle.

I can see this becoming more of an issue during throwing if the top of the head were to hit flat onto a surface. Yes, this makes the handle much easier to replace when needed but I feel it also causes a safety issue especially with sharp edges on both sides of the head, the chopping-edge, and the spike. If the head was loose enough when raising the tomahawk, the head could slide down the handle towards whoever is using it, which would be a problem.

* Note: Any modifications that you make to a product will most likely void any warranty that it has and can create other problems with the product. Use the above suggestions at your own risk.

Pros and Cons of the CRKT Kangee

I cannot believe how affordable this Tomahawk is when comparing it to how well it works, its feel, the quality craftsmanship, and yes how aesthetically pleasing it is.

But I would have liked to have seen a sheath included, even a cheap one, and for the head of the hawk to have been attached at the factory. Even though I may be making some personal modifications, overall, I like the Kangee and for the price, I do not think you can go wrong.