Let me start by saying that my primary objective in buying a new belt was not to get a belt for carrying a gun. No, I needed a new belt because the leather belt I’ve been wearing the past few years gets that inevitable sag where it doesn’t look right any more. I mean look at the curve that developed in these things.  That sag is without carrying the weight of a handgun attached to the side, it’s just normal, day-to-day work and leisure wear. Those are not cheap belts mind you. I don’t remember where I bought them, but probably a place like Bass Shoe.


By Derrick of Prepper Press

They’re genuine leather belts, but if you’ve been in the market for a belt, and head to many department or even “quality” name brand stores, you’ll notice that, like most things made these days, they’re all… weak. Can I complain about getting a few years use out of two belts for the probably $20-$25 each that they cost? I guess not, but… I’m happy paying a bit extra for something rugged that’s made in the U.S.A.

Enter the Daltech Force gun belts.  So, why a gun belt if you don’t carry every day?  Because they’re better built, that’s why. They’re built to carry extra weight, to stay stiff, to stand up. So unable to find anything decent for my normal office and leisure attire, I reached out to my firearms instructor homeboy, Steve Markwith.  He informed me the Department of Corrections have a lot of positive things to say about the Daltech Force. I do a quick search and like what I see: free shipping, lifetime warranty, hand crafted, and American made. 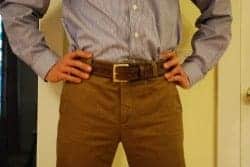 I ordered the “Double Stitched Bull Hide Bullbelt” in “Rich Brown” color. There are a few options you can choose from (you won’t be able to select options on a belt at any department store). I opted for a belt width of 1.5”, standard thickness, 9 holes at ¾” spacing, and a solid brass “squire” buckle. Shipping was free and fast, and the belt came with a spare screw.

Putting it beside my old belt, it’s easy to see the difference in quality. The leather is better, the stitching is significantly better (double stitched with better material). My old belt is stitched to hold the buckle on, whereas the Daltech Force belt is held with screws (hence the spare). The buckles themselves are comparable. I don’t know what forces all of my belts to inevitably sag, whether it’s poor stitching or inferior leather, or because they’re too thin, but the Daltech simply has to end up lasting longer just by design (though this is not a longitudinal review covering years’ of use, it’s my suspicion that the belt will last much longer). In fact, I was so happy with the belt I contacted the company and got another!

A Different Kind of Belt

Enter the second belt, their “IndestructiBelt SuperBIO” belt. This one, not of leather, is “unbelievably tough” they claim, “absolutely no stretch or sag.” The strongest belt you’ll ever ow, they say, which is probably true. You can feel the difference in it. “Made of thermopolymer polyurethane leather-like textured material with internal integrated polyester webbing, making it durable, waterproof, easy to clean and stronger than natural leather,” according to their website. Daltech Force really pitches this belt for CCS concealed carry. It’s scratch resistant and comes in either black or brown. While I think it could use a different name, there’s no denying that their “IndestructiBelt” is a well-built belt. I like it, I use it, but good ole leather is still my favorite.  Both of these belts are fashionable and rugged.

All Photos by Derrick