An entrenching tool, a small shovel, can be an invaluable piece of gear to have in your survival pack. But a survival shovel has more functions packed into it than just a shovel, giving it more versatility than your standard entrenching tool.

For this article, I will be reviewing the EST Gear Shovel. This shovel has 18 tools all packed into one, making it a handy tool to have in your pack or tucked away in a vehicle. Before getting into my review I would like to thank EST Gear for the opportunity to test out this product. 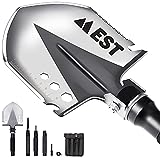 The Shovel at a Glance

A foldable shovel that when fully assembled, measures in at three feet long and weighs three pounds. The shovel head is constructed from reinforced hardened-steel and the handle is made from military-grade aluminum. This tool features a six-inch shovelhead.

The Tools at a Glance

The shovel and all the above tools pack away into a ripstop nylon sheath with a nylon carrying strap.

I would like to add that I created the above list of tools based on having the survival shovel in hand. These are the 18 tools I counted. I am pointing this out because I was unable to find an official listing of the tools on the company’s website and the list of tools I did find, didn’t appear to fully match up with this shovel.

For the field test, I will be breaking down all the tools included and different aspects of this shovel and testing each one individually.

Here are the actual pictures I took of the shovel:

The handle can be broken down into four separate pieces with two cushioned pads and two textured sections that provided a more secure grip.

The handle can be assembled and taken down quickly by simply twisting the individual sections. On the end of the handle is a lanyard hole with a paracord loop. This loop conveniently slipped around my wrist to make sure the shovel did not get away from me during use. Also, I found the cushioned part of the handle to be extremely comfortable.

The camping axe is meant for chopping and that is what I did with it. I started out chopping a few small side branches and the axe had no problem cutting right through them.

After a few minutes, I was able to chop through a green piece of wood. I will say that it takes a little bit of practice to use the axe but once I found my stride, it was a decent chopper. The axe also works well with the shortest handle configuration.

The one thing I did not like about the camp axe was that the shovelhead liked to turn sideways on impact. When this happened, it would also loosen up sections of the handle, which had to be tightened. I think that both issues make the camp axe less efficient.

The saw on the shovel head is several inches long and appeared to be sharp out of the box. Trying this out on a branch that was a little over one inch in diameter proved to be a tiring task. I think this had to do primarily with the length of the saw being only a few inches long, which drastically shortens the length of the stroke. However, the saw does do well ripping through other softer materials, such as green vegetation, dirt, and grass.

Hunting spears are great for, well, hunting, fishing, and getting to items that are otherwise out of reach. The spear tool could be fashioned onto a separate pole or used with the handles of the shovel.

There are two different handle configurations, short and medium length.

There are two things to be aware of with the spear. The first is that the two points are not sharp spear points, only one is. The point opposite the sharp point is blunt. The second is that I would caution the force used in the side to side movement of the knife blade. This is because the base of the spear is held into place by a small screw (making it replaceable?) and the knife does bend a bit.

The first test I always perform with a new knife is the paper cutting test. This knife did pass the test but not with flying colors, meaning that it was not “razor” sharp. I then tried cutting a piece of 550 paracord which it cut through in one attempt with adequate force.

I then used the knife to cut strips of wood for starting a fire. It was able to make small curls of bark, but I found the ergonomics of the knife to be uncomfortable. The blade also dulled rather quickly.

After using the saw on the shovelhead, I moved on to the mini saw for cutting through wood. After the tiresome effort put into the earlier saw, I was hoping this one would work better. Unfortunately, it did not. While it was more comfortable to use its efficiency was about the same as the shovelhead saw. It took me about five minutes to saw through a one-inch diameter branch. Both saws do work but they are not very efficient and they take a bit of practice to find your stride.

Firestarters are near and dear to my heart because they are an important tool in any survival kit. After striking the Ferro rod three times, it broke away from the base of the whistle. This was disappointing given the importance of a fire starter versus the possibility of losing it.

I did replace the Ferro rod into the handle and was able to get a fire going.

To be fair, after examining the fire starter there did not appear to be any adhesive around the base. So, I am unsure if the Ferro rod is meant to pop out of its base or not?

This and the wrench were the only two tools I did not try out at the time of my test. I can see the wrenches being useful depending on the situation you are in and what is around you.

The bottle opener could have some other applications but to be honest, testing it out as a bottle opener is of low importance to me and I didn’t have any bottles around.

Testing out the shovel was the best part of this review. I was able to dig through grasses and dirt to make a hole a few feet deep in just a couple of minutes. It dug into semi-soft soil like a champ and moved dirt like it was its job!

By adjusting the handle, the shovelhead can be brought down to a 90-degree angle, creating a hoe. I used this to further dig into the hole I created, to transport dirt, and to fill the hole back in. The hoe worked very well and I liked it.

A ruler is what it is, and I thought it was more important to double-check the measurements than to actually use it. Or did I use it by measuring another measuring device? Anyway, the ruler is accurate and will, therefore, work in the field. The ruler comes in at 8cm long.

The whistle worked well and took minimal effort to use. A few quick chirps and my dog’s ears perked up and she came running from a good distance away.

A quick side note. On the opposite end of the whistle is the Ferro rod, which broke off earlier in my testing. If the Ferro rod should break off the whistle will still work if you place your finger over the end of it.

I used a piece of 550 paracord to test out the rope cutter. Trying to hold the shovel in a comfortable way to use the rope cutter was awkward, to say the least. After a bit of tugging and pulling, I gave up and noticed that it had only cut through the outer sheath.

The compass in the handle of the shovel resembles that of most affordable button compasses. When I got around to inspect the compass, I noticed that it was missing! I know for a fact that it was there at the beginning but through my light duty tests of the shovel, it had popped out! Good thing that I knew my way home.

EST Gear does provide a lifetime replacement guarantee. So in this situation, I would just contact their support to get a replacement. Great customer service!

Overall, I liked the setup of the sheath. Even though the shovelhead has its own covering, I like that everything fits into one carrying pouch. If you keep one section of the handle attached to the shovelhead, that will leave one compartment vacant in the carrying pouch that can be used for other supplies.

The carrying pouch is secured shut by a strip of Velcro and an over the top plastic buckle. The pouch can easily be carried over the shoulder using the nylon strap. The strap adjusts from 27.5″ up to 49.25.”

There are also two Velcro straps on the back that form a “belt loop” for a different carrying option.

In my opinion, quality multitools are worth their weight in gold in a survival situation. The obvious advantage is they offer a compact way of carrying multiple tools without the added weight. But a multitool is only valuable if every tool on it functions the way it is supposed to. The tools I liked the most were the shovel, ax, ruler, the handle, and the whistle.

While I found the feel and construction of the survival shovel to be very solid, overall, it just did not meet my expectations The tools I liked the most were the shovel, axe, ruler, the handle, and the whistle.

Again, thank you to EST Gear for the opportunity to test out a viable survival product.

Bryan grew up in the Midwest and spent every waking moment outdoors. Learning how to hunt, fish, read the land, and be self-reliant was part of everyday life. Eventually, he combined his passions for the outdoors, emergency preparedness, and writing. His goal was to spread positive information about this field. In 2019, Bryan authored the book Swiss Army Knife Camping and Outdoor Survival Guide. His second book, Paracord Projects For Camping and Outdoor Survival, is scheduled to be released on March 2, 2021. Read more of Bryan's articles.