Donald Trump and Kim Jong Un have agreed to meet, what could possibly go wrong? It’s not hard to imagine what might happen if

things go badly when & if those two leaders meet and the US and North Korea get into a nuclear pissing match. The nuclear option involves mass destruction, radioactive fallout, and a bit of global destabilization. So with the instability of both the situation and the predictability of the situation, you know, given tweets and all. So here are Five Specific Things to get squared away care to survive. And all that squaring away must be able to go mobile on a second’s notice. This short list, of course, is on top of your regular preparations and bug out plans. of days, weeks, months, or years of food is up to you, your scenario, and your budget. A way to calculate your timeline is to follow this very rough basic math: Women burn 2000 calories per day. Drop that to 1500 and she will lose a pound per week. Men burn on average 2500 calories per day with a 2000 calorie daily diet causing a weekly loss of a pound. So you can do the arithmetic of both what amount of food you need for your comfort and duration, and what trajectory of starvation is acceptable.

Canned freeze dried Mountain House food has a 30 year shelf life and a two week once-open life. All that’s needed is water. If no water, then food is not your immediate problem. And in case you’ve never tried freeze dried food with just cold water, you are in for a pleasant treat. While it takes a little longer soaking time, it’s no different that when you let a hot-mixed meal sit too long.  Like cold pizza, you might actually like it more. Just don’t forget the can opener.

2. Water Filters: When on the run from a nuclear blast, you won’t have time to pack all your supplies and you

certainly don’t want a half-ton of water slowing you down and threatening to roll your vehicle on a turn, or pull you over a cliff. A water source and filtering must be in your plan. And like the food, you will need to do the math of how much water you need and can filter. My plan begins with at least 20 gallons on board in five gallon tanks. Any larger and they are hard to move, carry, and distribute around your vehicle for driving balance. The larger tanks often invite waste and spillage when transferring contents to smaller containers and cups.

Backpacking pump filters are a great idea, but you might have more time than freedom to pump. Instead consider something like the Epic Water Filters Pitcher; a Brita on steroids, if you will. That way you can be making a supply of pure filtered water while doing other essential tasks like driving or preparing camp.

While it might be prudent to consider a filter that removes radiation, the reality is that when on the run such a filter will have a short life and give no indication when it is no longer effective against radioactive particles in water. Unlike dirt and organics that clog a filter, there is a finite amount of surface area on the radioactive absorbing materials in the filter and when they are full, nothing changes except the radioactive particles now flow right through the filter like its not there…because it isn’t anymore.

If you have to cut financial corners, do it elsewhere. Water is not only the basis for life, but a fluid that is consumed internally daily and drenches mucous membranes where contaminants can get a foothold creating hundreds of ways to kill you.

3. Fuel For Your Vehicle: As you can imagine, an nuclear blast is a traumatic experience for those not vaporized, 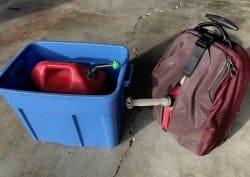 incinerated, or irradiated. The panic will be instantaneous and permanent. Swinging by the gas station is not an option, and neither is stopping for long when you are outrunning a gruesome, painful invisible death sentence.

Go grey with your gas cans. I’ve seen cars headed into questionable situations with as many as half a dozen bright red gas cans strapped to the roof like a parade float. Going grey with your gas means putting the gas cans into duffle bags or second hand suitcases or travel bags. A pile of visible gas cans is probably the fastest way to get robbed.

The quantity is up to you, but using the Mt. St. Helens model (see #5 below), you will need 1000 miles of gas in a worst case. For many vehicles that’s two full tanks or a 20 gallon onboard start, and another 20 in four five-gallon cans. Minimum. You might arrive, but then be out of options because you are out of gas. Drive a guzzler or tow a trailer and count on doubling the above prognosis or halving your potential.

4. Wind Speed Meter: Sure you could just toss up some dust or dried grass, but keep that as your backup plan. What you really need is a definite wind direction and speed. Those two tidbits might be the most important pieces of information when on the run. Little wind and you can outrun it. Strong wind and you might have to head into it. It all depends on the distance from and prevailing direction of contamination as well as the natural barriers like mountains, valleys, and drainages.

My analog here is the eruption of Mt. St. Helens. The path of the ash was mostly east and then turned south near the eastern edge of Montana. So it covered all of eastern Washington, the north half of Idaho, all of Montana and North Dakota, most of Wyoming and Colorado, two thirds of South Dakota, finally dipping just across the border into New Mexico. The lesson here is that the ash followed the wind, the fastest escape route might have been to head south west towards the source at an angle even if it meant going into the cloud. Of course ash and radioactive fallout are two completely different things, so studying maps now will give you some idea of where to head if you know the location of the source.

There are iPhone/Smartphone options where a little wind meter taps into the headphone output port. Or a bluetooth solution like a Weatherhawk, or Pasco Scientific. And stand-alone devices like the handheld Kestrel and Oregon Scientific anemometers.

5. Radiation Monitor or Geiger Counter: Radioactive materials as part of fallout from a nuclear blast will follow the path of the wind. So two pieces of intel are needed; first, you need to know if there is an uptick in radioactivity or not. There are minimalist solutions that just change color when the radiation level increases. And more sophisticated devices that sound an alarm. The problem with those first two levels of radioactive indications is they are non-specific, non-directional, and non-quantitative. Moving up the ladder another rung is a stand-alone meter like the yellow 1950s civil defense Geiger Counters. However, while state-of-the-art 60 years ago, many more options are available today. And if you are planning on using “Old Yeller” you better have a five-gallon bucket of D batteries!

Companies like Vernier Technologies are a great source for a choice of on-the-run Radiation Meters, with a bluetooth option talking to your iPhone. And a quick trip to the Amazon.com will give you plenty of choices starting at a buck and a half (that’s $150 to the rest of you).

I guess while you’re out shopping now, you might want to pick up some potassium iodide to protect the thyroids of you and your loved ones. But that’s a topic for another day.

The last thing you want is to try and get your act together when the news report sounds like a Tom Clancy novel. You must assess the situation. Make a decision. And go. Not figure it out. Lay out some options. And then go shopping. The window of opportunity is smaller than almost any other catastrophic man-made event. There are no major surprises here. A nuke could fly through the air exploding over somewhere in the USA. and won’t matter one bit if we turn North Korea into bacon. The damage here is done, so the rest is up to you. If you don’t believe me, please watch the classic movie from 1983 called “The Day After.”

5 thoughts on “Five Things To Get Before North Korea Goes South!”