Best Geiger Counters: Top 5 Picks, Are They Worth It?

Geiger Counters are essential to have if you think you may be at risk of radiation poisoning. This article will cover the different types, reviews, and more to give you a head start.

Nuclear warfare is probably the worst disaster imaginable. If you look at the sheer size of the dangerous weapons the world has, you will pucker up quickly. Many countries have these weapons, and some countries aren’t necessarily good friends with the United States.

Luckily, we have a military built like no other, which has allowed us to be significantly protected thus far. However, war can break at any time, even if things seem to be going in a great direction.

Nuclear bombs, when detonated, cause an enormous explosion at the detonation site, which after the fact, causes a large amount of fallout to fall from the sky. The topic relevant for today, though, is radiation.

Nuclear bombs leave an extraordinarily large amount of radiation behind after detonation, which is deadly if you absorb too much of it. However, it can still cause severe long-term side effects; even if you absorb a little of it.

If you have a bunker and plan to ride out this wave of toxicity, you’ll need to make sure it’s safe to exit the shelter. This is why Geiger Counters are critical to have if you want to play it safe after disasters. Let’s get into it.

If you’re like most people looking for a Geiger Counter, you’re likely going to buy a portable one. These are handheld and frequently are compact enough to fit in the pocket. Some Geiger Counters can detect one type of radiation or many.

They’re typically used acutely for short amounts of time and are powered by batteries. However, if you are looking for one of them to stay active long term, a stationary Geiger Counter would be best.

Stationary Geiger Counters are often powered via USB, meaning they can stay powered on for long periods. The performance of both types are pretty similar, so it comes down to personal preference.

Some Geiger Counters can detect X-Ray radiation. This type of radiation is rarer to run into than the other types of radiation listed here, but if you are exposed to high enough levels, it can lead to severe illnesses.

Like X-Ray radiation, Gamma radiation can also penetrate through the thickest walls, carrying similar harmful effects as X-Ray radiation, leading to various illnesses. Luckily, Gamma is easily detected with Geiger Counters that have this detection built-in.

More common than X-Ray and Gamma radiation, Beta radiation is roughly 8,000 times smaller than the others, making it a hazardous type of radiation. It is typically blocked by walls or another solid object, but if it comes into contact with the skin, it can cause extreme injuries like skin burns.

This type is by far the least dangerous type of radiation typically detected by Geiger Counters. It does not travel through solid objects. Alpha radiation is very unlikely even to penetrate the skin. It can, however, be swallowed or get into any wounds, at which point it could lead to minor or severe injuries, depending on your luck. 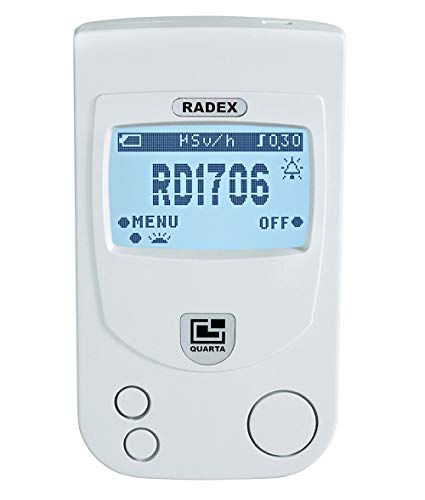 Available here, this Geiger Counter is probably one of the most portable ones on this list and does not fall short of functionality.

This means that there is no need to carry two separate Geiger Counters, saving both money and space.

It also has a backlit LCD panel for easy viewing and even has alarms for when it detects levels of radiation. It is operated using three triple A batteries and has surprisingly long battery life.

The design is pretty simple, as is the ease of use, only featuring just a few buttons to operate the device. The Radex Rd1706 is the perfect Geiger Counter for those of you inexperienced using one. 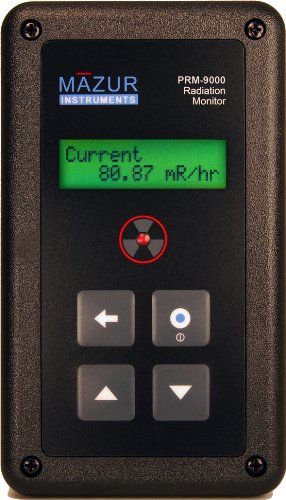 The PRM-9000 is packed full of useful features, all in a straightforward setup. It houses a speaker, which I’ll say gets very loud, although that’s not a bad thing.

It is also battery-powered, making it very portable. Although it should be noted that this Geiger Counter is not comfortably fitted in the pocket, although it is possible.

It has a pretty wide range in terms of radiation sensitivity, so you can be confident that even in situations where little radiation is present that the PRM-9000 will pick it up and alert you.

A very cool feature that this Geiger Counter has that many others don’t is a log system. This means that you can log and record radiation levels for future viewing or comparison’s sake.

All of this, yet very user friendly. This is also another excellent choice for novices, yet great for the hardcore user. 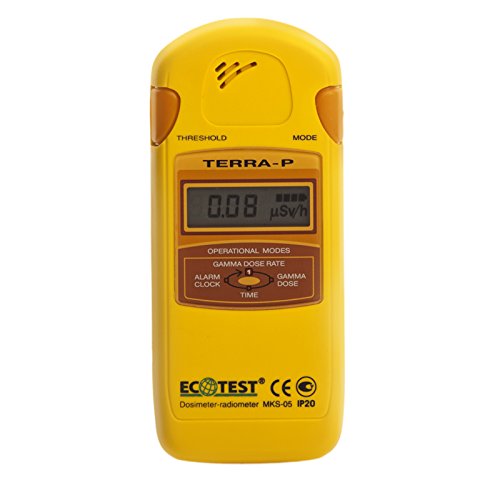 If you’re looking for a feature-rich Geiger Counter, then the Terra-P MKS-05 will serve you well; it’s a very well rounded device great for just about any situation you throw at it.

For starters, it has a straightforward and user-friendly build, only housing just a few buttons. However, it does not lack functionality.

When I’m looking for a useful Geiger Counter, I want it to have the ability to set specific thresholds for when the alarm activates, and the Terra-P does just that.

It also features a built-in LCD panel for easy viewing. It does not feature logging as some other Geiger Counters do, but at the price point, you really can’t complain.

The alarm is pretty loud, and it can pick up both gamma and beta radiation, making this device an all-around fantastic buy for almost anyone. 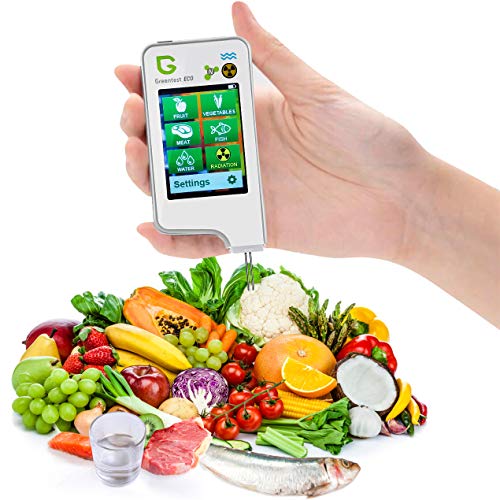 This compact Geiger Counter has a few features that are hard to find, such as activating vibration for the alerts, X-Ray detection, and the ability to both see and save certain radiation levels.

The Greentest Geiger Counter is meant to test for radiation within the food, which can be contaminated by various disasters, such as any natural or human-made disaster.

This way, you can simply press a button and have a predetermined level be automatically adjusted. The battery life is perfect, and the build is pretty user friendly.

The LCD is more significant than most others listed here, so it will be easy to read. This Geiger Counter also has vast detection levels, so even in the highest levels of radiation, this bad boy will quickly pick it up.

It’s also pocket-sized, which makes this a very portable device. This Greger Counter would be especially helpful for Nuclear radiation, although it suits just about every situation. 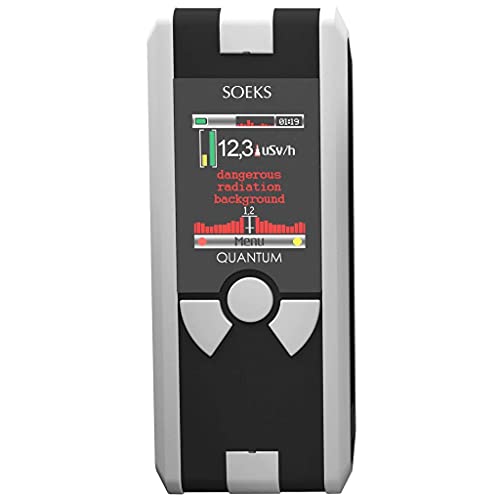 Probably the most sophisticated Geiger Counter on this list, the Soeks Quantum is one to have if you’re serious about radiation detection. This Geiger Counter features a sizable colored LCD screen with a plethora of useful features.

This Geiger Counter, however, is best-used stationery. It is excellent to use around the home or other locations at risk of radiation and placed there long-term.

It is hooked up via USB to a PC, which allows you to view many extras that you cannot on the built-in screen.

Nonetheless, it alerts via the screen flash and audio for various types of typical radiation. This is perfect if you are not expecting radiation but want to be on the safe side just in case.

The other Geiger Counters listed above are ample, but they are not meant to alert you 24/7 like the Soeks Quantum is, which is why this is an excellent buy aside from the many features.

How To Use Geiger Counters

If you’ve already got a Geiger Counter and you’re ready to start using it, the first step is to turn it on. If you have a portable one, you’ll likely need to place a few batteries inside. If it is a stationary type Geiger Counter, you may need to plug in into a power or USB outlet.

If you have a Geiger Counter device with an LCD screen, you may be required to set it up. Many also have logging systems that need to be set up before you test for radiation to record and save the data. It may also make you do tests to ensure that it is working correctly.

Each type of radiation is different, so refer to your user manual regarding what your particular Geiger Counter results mean. However, the higher the scale goes, the more radiation there is in met cases.

How Accurate Are They?

Many of them are used for non-emergency purposes, so they are not entirely accurate. Keep in mind, handheld Geiger counters will not hold a candle to those used by our military, but they are valid enough for the average user.

I think it’s okay to expect around 50% accuracy, although this, as said before, can vary widely. These Geiger Counters are undoubtedly good enough for most situations and will let you know if danger is prominent.

Why Should I Have One?

Geiger Counters are great for anyone preparing for any SHTF scenario or for those of you who want to be prepared for more common disasters like Hurricanes.

Although rare, equipment malfunction can emit a dangerous amount of radiation that you may not even know is there, affecting you long-term.

They are also great for those of you who work around equipment or material that has a possibility of emitting radiation.

Which One Is Best For Me?

This mainly comes down to personal preference, although other factors do come into play, such as which features it includes.

If you use the Geiger Counter for portable uses such as work or disaster scenarios, then any portable one that covers most radiation types like Beta, Gamma, and Alpha would probably suit you best.

Geiger Counters are, in my opinion, critical to have if you are a prepper or work around materials that pose a radioactive risk. Radiation can pose a severe threat to any living thing and can cause illnesses like skin burns, loss of consciousness, cancer, and much more.

They come in different sizes and uses, some better for particular kinds of radiation than others. They’re typically easy to use, although you should make sure that you read the user manual well so you’re able to judge the conditions without risking injury due to misuse.

The Military often uses Geiger Counters during operation that poses a risk of radiation poisoning. They’re even used by adventurers traveling into Chernobyl, a city in Russia that has very high levels of radiation due to a nuclear reaction mishap within the town.

Brian Rucker has spent his entire life participating in essentially all things wildlife. His concern grew astronomically during the previous tensions between the United States and other nations. He also has grown a substantial interest in survival and sustainability due to the current shape of the world over the years. He believes that preparation triumphs all things.