Today was a fun day because it was time to test out a new piece of gear! For this article, I tried out and will be discussing the Fire Escape Multitool Carabiner. So with that in mind, let’s jump right into it. 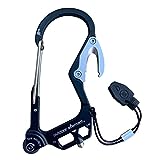 Let’s go over the specifications.

The first thing to know about this multitool is that it comes with an EverSpark Wheel that creates sparks for creating a fire. A nice feature is that the Ferro rods used in the EverSpark are replaceable.

On the side of the carabiner is a seatbelt cutter that can be used in case of an emergency or to simply cut cordage.

On the bottom of the multitool, you will find a tungsten carbide-tipped window breaker for those worst-case scenarios.

Just above the window breaker are two wrenches. An O2 wrench and a ¼” hex wrench that can both double as a hanging slot for keyrings.

At5.75 x 3 x .3 inches and only weighing 1.6 oz the stainless steel body and stainless steel wire gate make this multitool convenient to carry. The carabiner is rated to hold 125 lbs of gear. Note, it should not be used for climbing!

The whistle is made from POM plastic and capable of 115dB. There are two options to choose from, black or orange.

This kit also comes with a small screwdriver for adjusting or replacing the Ferro rod on the carabiner. The screwdriver also doubles as a small reflective device.

3 TinderQuicks are included that can be used as an easy way to get a fire going.

A barrel swivel clip and split ring are added for conveniently attaching to the carabiner.

I grabbed the Fire Escape and the Wombat Whistle, I’m curious how they decided on the name Wombat because it is weird but cool at the same time, and headed out to my workbench. The first thing I had to try out was the EverSpark Wheel.

The first thing that I noticed was that the wheel was incredibly easy to spin and produced a good number of sparks. There is also a slight curve to the frame where tinder can be closely placed to the sparks. I took out a piece of TinderQuick, fluffed up the end, and with one spin of the wheel, it ignited into a flame.

I was just getting into the TinderQuick above but thought it deserved its own little section. As I mentioned earlier in the article three come with the kit but only one fits in the vial. When placing it in the vial I suggest pushing it into the hollow portion of the lid. This way when the lid is unscrewed it will pull the tinder out automatically. This way you will avoid having to try to dig the tinder out of the vial itself.

On the back of the packaging for this kit, it states that the tinder will burn for 1-2 minutes. When products state things like this it just begs for me to test it so of course, I ran a timed trial. After lighting the TinderQuick I set it off to the side and started the stopwatch. From the time it ignited to the moment the flame went out was one minute and twenty-eight seconds. Good job Outdoor Element.

Luckily for my neighbors and wife, I decided against testing this on all of the available windows around. I instead had to settle for the next best thing, which was a glass bottle. I know that it is not the same, but hey it’s the best that I had. I took all appropriate safety precautions and placed the bottle inside a box and wore eye protection as well as heavy-duty gloves. After everything was ready it was time to smash! With one quick hit, the tungsten carbide tip breaker easily shattered the bottle. Rest in peace sailor!

Next on the agenda was cutting through some stuff. I didn’t have any seatbelts to cut, I mean I did but since they were in the vehicles that we drive I decided they should remain in working order so I had to pass on those. I settled for some one-inch wide nylon strapping and a piece of 550 paracord. The blade was very sharp and made easy work cutting through the nylon that was standing in its way. A bonus is that the cutter is replaceable or can be removed to make sharpening easier.

Also, it comes with a protective sheath! I cannot say how much I appreciate this. Normally I do not like these types of blades because they have no covers which means they catch on all sorts of stuff. Thumbs up Outdoor Element.

I didn’t have a scale around to test out the advertised weight capacity so I will take Outdoor Elements word on it. However, it did hang nicely from the belt loops on my shorts.

I searched high and low but I wasn’t able to find any hex bolts or oxygen tanks that I could test this out on. The frame of this tool feels quite sturdy so I am confident the wrenches would work as intended and I am sure one day I will be glad to have them.

I am usually not a fan of one and done tools so being able to replace the Ferro rod is great. It is also very simple.

On the side of the carabiner opposite the EverSpark Wheel is a small hole. Insert the small screwdriver to loosen the hardware. The screw and spring will pop out. The Ferro rod may take a little coaxing, tap the carabiner on a table a few times and it will fall out. Now, simply insert a new Ferro rod, the spring, the screw, tighten it all up and it is ready to start many more fires.

The small screwdriver does have a reflective surface and could be used as a signal mirror.But it is very tiny and somewhat awkward to use in this manner. However, I applaud the company for suggesting how to use everything in this kit to its potential.

I blew in it. It was loud. My dog came running. It works!

After all of that testing, I sure was thirsty. I went back inside and used the bottle opener to pop the cap of a tasty beverage. It worked and my thirst was quenched.

I have tested a lot of gear in my life and there is something that I need to say. For whatever reason, I always have some preconceived notion as to whether I am going to like the gear or not. When it came to this carabiner, I was sure that it was going to be another multitool that did a bunch of things okay, but overall wouldn’t be that good.

I was very surprised by this product and I actually like it. It feels durable and well built. The fire starter works great, the Ferro rods can be replaced, the seatbelt cutter was razor-sharp, the glass breaker smashed through a bottle in one hit, the wire gate has a tight lock up and all of this is lightweight and compact.

So do I like this product? As I write this last sentence the carabiner is still clipped to my belt loop.

P.S. I would like to thank Outdoor Element for the opportunity to test out the FireEscape Carabiner and the Wombat Whistle.