Before a few weeks ago, I had never heard of a self-defense umbrella – at least not outside of some James Bond-type of movie. However, real world applications of this was brought to my attention recently, and it piqued my interest.

What is a self-defense umbrella? What features could an umbrella for self defense have? Is there any validity to this idea, and are there actually products out there marketed towards this?

Well, I decided to dig a little deeper into this topic and here’s what I’ve found in my search.

I would like to note that I am coming at this topic with an outsider’s/armchair perspective as I have never owned a self-defense umbrella nor have I used an umbrella for self defense, so this should be interesting and fun topic to tackle.

What is a Self-Defense Umbrella?

Obviously, a self-defense umbrella is an umbrella that a person would use for self defense.

But seeing that almost any object can be used for self defense, even a common umbrella, a self-defense umbrella has some features that make it stand above your normal, everyday carry umbrella.

Features of a Self-Defense Umbrella

Apparently, there are some people out there that have put some thought and work into creating an umbrella that can be used as a self defensive tool. This is encouraging, considering that most of the umbrellas I have owned fold under the pressure of a brisk breeze and therefore probably wouldn’t win a skirmish against a Chihuahua.

Some features of self defense umbrellas I have found include:

There are even some that are more of a “tactical umbrella” due to having features that most umbrellas don’t.

Why Would a Person Get a Self-Defense Umbrella?

I’ll admit that when I first thought about the idea of a self-defense umbrella, I thought it was a bit ridiculous and quickly dismissed it. But then I came back to the idea because I realized there are lot of places in the world where people are not allowed to carry a better self-defense weapon.

In places where a better self-defense weapon is not allowed, you will have to take a closer look at the items you are allowed to carry that will help you maintain personal safety and have some level of protection.

An umbrella is a very common item, and I think it’s safe to say that almost everyone has one. So, if you can find one that holds up as a defense tool, why not carry it?

The following are the top self-defense umbrellas or best tactical umbrellas on the market based on the reviews I could find and my thoughts on the products’ capability. 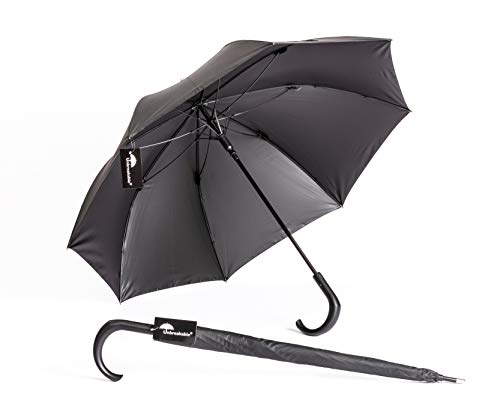 This umbrella from the company Unbreakable seems to be constructed from some tough materials, which is why it is apparently as strong as a steel pipe.

There is a video of this umbrella being tested in a wind tunnel and holding up to almost 60 mile per hour winds, which I thought was quite impressive.

What was more impressive is on the second test, they turned the umbrella around so that the wind was hitting it from the underside. Eventually the top did fold over, but it was able to be put back into place and apparently worked just fine.

I gotta say that I also liked the photo of the umbrella stretched between two chairs with a guy holding a dog and standing on the umbrella without the product breaking. I’m pretty sure I couldn’t do that with any of my umbrellas.

Also, there is a large rubber tip on the end of the umbrella that provides a little more surface area and protection for when the umbrella is used as a walking stick. When the rubber tip is removed, it reveals a large stainless steel tip that should hold up when it is used for impact tasks.

At just over three feet long, the umbrella might be a little awkward to use as a walking stick for people that are shorter and may be better suited for taller people.

If you are going to be using this product as a walking stick and you are concerned about the length, I would recommend taking out a tape measure and seeing where three feet comes to on the side of your body before purchasing.

However, the length of the umbrella will provide the ability to create distance between you and a threat or an attack.

The biggest downfall of this product would be the price. At almost $200, the Unbreakable Walking Stick Umbrella is rather expensive. However, if it is truly unbreakable and works as advertised, it could be a good self-defense tool when battling the elements and other threats.

Nothing about this umbrella makes it stand out from most other umbrellas, so you don’t have to worry about drawing attention. Plus, since it is just an umbrella, it can be carried anywhere. While this is just my opinion, the aesthetics of this product appeals to me because it looks more like a classic, elegant umbrella.

Lastly, the Unbreakable Walking Stick Umbrella does come with a 5-year warranty, which may help to offset the cost if you intend on using this product a lot. 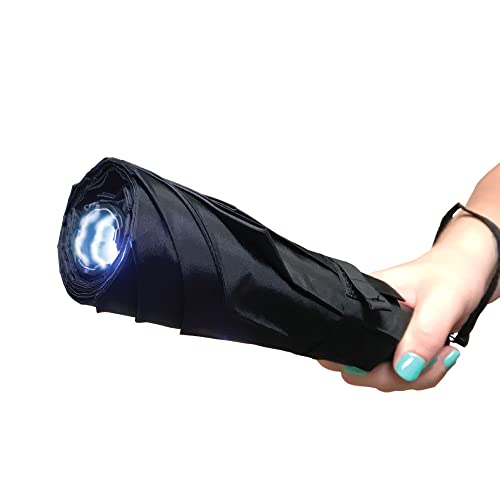 This product isn’t a regular umbrella, but merely camouflages itself as one. It has an LED flashlight on the end of the umbrella and a functioning taser that can apparently deliver 32,000,000 volts…

These two features definitely place this product in the category of self-defense umbrellas.

The “umbrella” is rechargeable, and it does come with a charging cable that plugs into the bottom of the handle.

Now, I am a big fan of carrying a flashlight, and I think tasers are certainly effective in a self-defense situation. But I only found a handful of reviews on this product, and while most of them were positive, I didn’t get the feeling that anyone had actually used the product very much. Instead, they liked the idea of it and wanted to be prepared.

I couldn’t find much on the fully functional taser other than it is loud and sounds scary. The flashlight seems to work okay, but it doesn’t sound like it is very bright.

Since it looks like a regular umbrella, this self defense umbrella won’t draw any unwanted attention, unless of course you care carrying it in the rain. This is because it isn’t a functioning umbrella.

However, it is very lightweight, compact, and affordable, which opens it up to many different kind of users.

Because it has a taser, you will need to check the local laws in your area before you purchase and carry it. The taser function is also going to limit where you can and cannot carry it, so it’s better to know this beforehand rather than run into trouble down the road.

While I have not used this product and it could work just great, my gut leans towards it being a bit “gimmicky.” But it retails for around $30, so it’s not a huge investment if you want to give it a try. 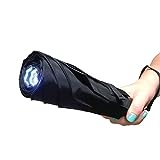 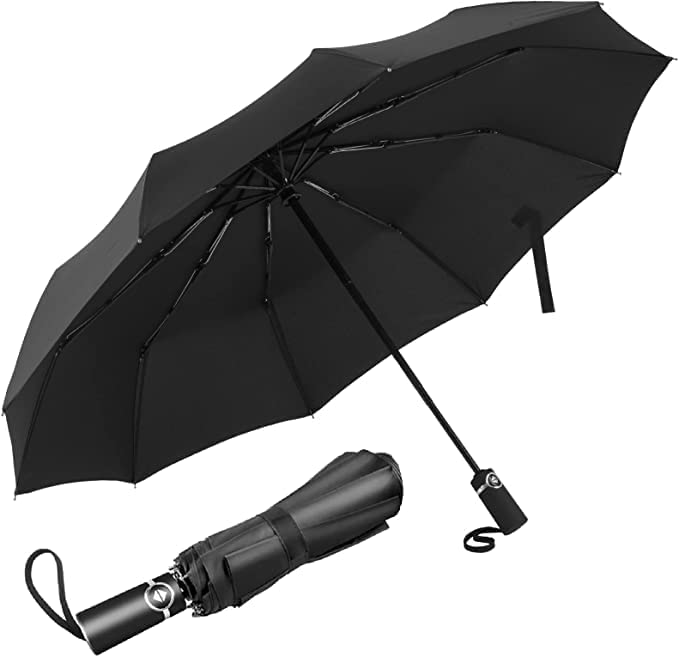 To begin, there are different sized models of this product, but this one happens to be the smaller, “city safe” security umbrella. Its labeled as city safe because its smaller size makes it far easier to carry and use in crowded city areas, like when you are on a public transport.

This umbrella comes with a straight handle rather than a crook handle, which may be more comfortable to some users for normal use.

I like that it comes with a shoulder carrying sling. This should make it more comfortable to carry when the there isn’t bad weather.

Two added benefits of this self defense umbrella are the fiberglass ribs and the metal tip.

In high winds, the canopy will fold over. But instead of breaking, the fiberglass ribs will bend. This allows the canopy to be folded back to its original shape. The stainless steel tip gives protection to both the user during an attack and while being used as a walking stick.

From what I could find, the reviews for this self defense umbrella are all over the place. Some customers are very happy with it, while others complain of poor quality with components of the umbrella breaking after limited use. The consensus seems to almost be split 50/50.

The biggest two biggest downfalls of this one seems to be quality control issues, especially since it retails for around $124. 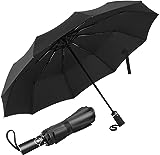 After doing a bit of research, I’ve concluded that umbrellas with a high enough build quality may be underrated self defense weapons.

At first glance, these are everyday items that don’t draw unwanted attention, which means you can feel comfortable bringing them with you almost anywhere you go. While an umbrella may not be the best tool for protecting yourself in a combat situation, in regions where you can’t carry something better, it will give you higher level of protection over having nothing.

If I lived in such an area and was presented with the three options in this article, I would probably lean towards the Unbreakable Walking Stick Umbrella. I am not a fan of the price tag, but the cost may not be so bad if you live in a rainy region and it’s the only defense tool you can carry.

While the Stunbrella looks like the bad boy on the block and has a great price point, there is something about it that I’m not sold on. The taser function should offer good protection, but you will need to pay extra attention to whenand where you cannot carry it.

I do like the features of the “City Safe” Umbrella, but with the amount of negative reviews on quality versus its high price tag, I would probably pass on it.

I certainly didn’t cover all of the options when it comes to a self-defense or security umbrella, but I did try to cover a mixture of popular, high-cost and low-cost “tactical umbrellas.” This way you have a better idea of what is out there.

In closing, I would like to state again that this article was not meant as a promotion in any way because I don’t have first hand experience with the products I discussed. I simply wanted to take a look at some different kinds of defensive tools and share my thoughts with you.

Thanks for reading and stay prepared!