How can the ShamWOW help you Survive?

You’ve all seen the commercials with the annoying little Billy Mays wannabe guy who shows you how to soak up an entire bathtub full of water with that little chamois, but have you ever thought of using those super-absorbent towels in your survival gear? Maybe you should.

I’ve used a synthetic chamois as a camp/backpacking towel for years and honestly I don’t know why you would use anything else. 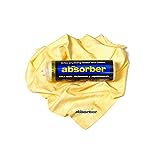 What Can a ShamWOW do?

According to the ad it holds 21 times its weight in liquid and I can say that’s a pretty accurate statement.

It’s lighter than a regular towel by a lot so that saves weight in your Bug Out Bag. Also, you only need about 1/4 the size of a synthetic chamois than you would with a regular towel. You could easily and completely dry yourself with a 6×6 or 8×8 inch square.

Not to mention that it dries quickly and you can wring it out. Cotton towels, like all cotton, stay wet forever and mold.

You already know it can soak up spilled wine on your nice carpet and is machine washable when you clean up after the dog so let’s look at some practical survival applications.

You could wipe dew off of the top of your tent, or the grass, and wring out the chamois into a water container. Since it wrings out so well this could actually be an effective water gathering tool if you really needed it. You’d never get that with cotton.

You could dip the chamois into a tiny puddle or some other bit of water that would be otherwise impossible to collect and again wring it into a water container. That would even serve as an initial filter because you would wring out the water without the debris.

It could be soaked and used as a cooling towel to wrap around the neck and head on hot days.

Since it retains so much water it could be used as a way of transporting water over short distances, say from a creek to your campsite.

Benefits of the ShamWow

Is the ShamWOW machine washable?

A: Yes, the ShamWOW can be washed in your washing machine but it should not be put in the dryer.

Are they easily torn?

No. The ShamWOW is pretty durable and will hold up to a lot of use. It does not tear or rip like a paper towel. If you want to make the larger ShamWOW towel into smaller washcloth sized pieces, you will need a pair of scissors to cut it.

There have got to be some other cool survival uses for a synthetic chamois, or ShamWOWif you prefer. Leave a comment with your idea.

Even more surprising because Billy May’s was well known to hate the ShamWOW because he had the same product under a different name years earlier and the ShamWOW guy crushed it.

The Shamwow brand goes for an affordable price on Amazon. You get 4 large and 4 small.