Fortunately, or perhaps not, depending on how you personally handle choices, is the fact that companies today rarely leave a design untouched for long. There’s always something better. Something new. Something more powerful, lighter, stronger. It never ends until you end it personally. To be truly content with an outdoor tool, the very existence of the tool must become invisible in the presence of its task. The object itself must melt into the background completely overshadowed by its capabilities.

The specifications of the BioLite HeadLamp 200 include light weight, four lighting modes including a dimmable white spotlight, a dimmable red colored flood, and red and white strobes. Powering the BioLite HeadLamp 200 is a USB rechargeable 700mAh lithium ion battery, which for reference, is about a third or forth of the capacity of an iPhone battery depending on phone model. 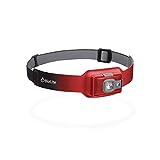 I’ve been a big fan of headlamps ever since my first one that used four D-cell batteries carried in a red plastic belt-mounted case with a heavy wire leading to a rubber headband containing a large plastic flashlight-like head.  Although that particular light worn on the head (or helmet) was heavy, dim, and had a short runtime, it opened up the world of hands-free lighting.

When at full speed, the BioLite HeadLamp 200 will pump out lumens for about three hours. On low that range extends to 40 hours. But unlike battery-fed headlamps, you can leave home or camp with a full charge rather than whatever is left in the little disposable alkaline tanks.

Where this BioLite HeadLamp 200 fits into the userspace is with its tiny forehead footprint stressing comfort and bounce-free lighting. By keeping the weight low and the headband wide, you will forget you’re wearing the BioLite HeadLamp 200 regardless of which of the four colors you have on. So confident is BioLite in the comfort of this headlamp that they have a 30-day HolyFit Guarantee.

The microUSB charging port on the BioLite HeadLamp 200 is at the nine-o’clock position (facing forward). A green light breathes in and out, pulsing gently as the battery drinks in the electrons. The onboard lithium cell takes about two and a half hours to go from bone dry to stuffed to the gills. Plus, the BioLite HeadLamp 200 gives a brief blip of green light when powering down that indicates good or low battery life.

As a comparison, my other superlight headlamp is the Streamlight Bandit LED headlamp. However, the Bandit has never seemed to be much of a performer outside of it’s tiny footprint and low weight. The light it casts is bland and shallow, and the on-off button is troublesome with bare fingers and near-impossible with gloves. Until new interfaces are discovered, the finger-push button will remain the industry standard as long as the finger is also the standard. That fact limits how small or sensitive a headlamp interface can be. Black Diamond does have some touch control headlamps, but only minor systems like brightness. The main I/O is still a rubber-covered index-finger-ready switch.

The Streamlight Bandit weighs about a tenth of an ounce less than the BioLite, but throws much less light than the 20 lumen difference between them in the specs. I find the Bandit to be less comfortable with its narrow band, and the light from the Bandit has much less reach. Great for reading in a sleeping bag, but not for forest travel any faster than a walk. The BioLite HeadLamp 200 provides enough of the right kind of light for an easy jog through the woods, and a full on run across the flats. Plus the wider “Smart Fabric” headband is vastly more effective at holding the light in place. However, it did seem to loosen over time a little under certain conditions.

The Bandit actually contains 10 individual LEDs in a row across the front of the headlamp window. Rated at 180 lumens, I suspect that it means that each of those individual LEDs is about 18 lumens thus totaling 180. You can do that. But the human eye does not agree. Two 50 lumen flashlights do not appear as bright as a single LED 100 lumen one. So lumens are only one kind of reference point. Imagine fighting a fire with a garden hose that sprays water at 10 gallons per minute. Now get nine more hoses giving you 100 gallons per minute output. Compare that to a single hose blasting out 100 gallons per minute. While not quite the same as our eye’s logarithmic interpretation of brightness, you can see that there is more behind the lumen number than just quantity. The initial single-point brute force lumen number appears greater than the sum of multiple lesser lumens with an equivalent total.

Beyond lumens feature. The BioLite HeadLamp 200 has two outputs; a minimum of 5 lumens and a max of 200. Burntime is about 40 hours on low and three hours on maximum output. However, while maximum output begins at 200 lumens, the number drops over time. Essentially, any maximum output runtime just means that the lamp is giving its all until death even if that means an hour of very low output.

For fans of a red light, there is both a red flood (solid on) and a red strobe option. Red light is the longest wavelength our eyes can see. Anything longer is infrared or beyond (microwaves, radio waves, etc.). By using a red light source, the retina stays within its scotopic (rods) black and white vision mode. A white light would cause the retina to transition into the photopic (cones) color vision mode which is much less sensitive in low light. So even though you are using an artificial light source, the red wavelengths are as close to dark as possible meaning when you turn off the red light, you still have dark-adapted vision. There is little to no time delay between seeing under the red light, and with ambient moon light.

The BioLite HeadLamp 200 weighs about 1.7 ounces. And that gave me an idea. What if I used the sub-2 ounce rule to build a quick survival kit. Of the four big ones of knife-water-fire-light, I found that my Benchmade Bugout knife weighs in at 1.8oz, my LifeStraw at 1.6oz, and my Bic Lighter inside a waterproof Exotac FireSLEEVE was a scant 1.5oz. All four combined weigh in at under seven ounces. Not a bad footprint for a grab-and-go set of kit.

BioLite retails the BioLite HeadLamp 200  for less than $100, which puts it in about the middle of the cost spectrum for general purpose headlamps. You can spend half that or twice that and still get what you pay for. But when cutting weight and size is important, the price dynamic becomes nuanced since both less is less and less is more are at play. And with the BioLite HeadLamp 200, less is more.