said this a lot to me when I was growing, especially if he caught me not properly taking care of a tool. The circle has come around as I now find myself saying this to my kids.  In the case of knives, taking care of them means keeping them sharp and ready to do work at a moments notice.  I found the DMT Diamond Sharpener to be up to the task of keeping almost any knife ready for the fight.

Hands down, the most important tool that I have on my person at all times is a knife. I like to keep my knives as sharp as possible at all times. There are two reasons why you want a sharp knife. Reason number one, a sharp knife cuts better, a no brainer I know.  Reason number two, a sharp knife lowers the chance of a person hurting themselves.  This might seem backwards but just think about it for a minute. A sharp knife cuts items easily and smoothly.  A knife that is dull takes more work for you to cut the same item which means you are pressing harder and are more likely to lose control of the blade. I have experienced this many times in my life and have the scars to prove I know what I’m talking about.

Recently I came across the DMT Diamond Sharpener.  It has a very unique design that I wasn’t sure if I was going to like.  The shape of it, is rectangular but the sharpener sits in between two pieces of plastic that act as a cover.  On one end the two pieces of plastic are secured to the sharpening stone by two rivets.  When you want to use the sharpener the plastic folds out to one end of the sharpener, just like a butterfly knife, and they become the handle. I was afraid this was going to be flimsy but so far it has proven quite sturdy. Having extra length with the handle also helps in sharpening the blade at any particular angle that you want. 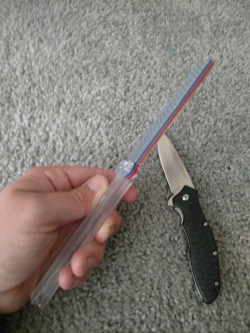 Given its compact size the DMT Sharpener tucks away nicely in my front shirt pocket just behind the notebook I always carry. The instructions on the box inform you that you can use the sharpening block either dry or wet by simply using water. I have been using it dry to sharpen my knife and I clean the block afterwards with plain water and a paper towel. The company also says that there is an initial break in period for the sharpener though they don’t say exactly what that entails other than the surface of the sharpener may seem rough until used for a period of time.

I have been using the DMT sharpener for about one month now and I would say that the surface of the sharpener smoothed out within about five uses. The most frustrating thing about sharpening knives is how many strokes it can take to get a good edge. Thus far in my experience it takes significantly less strokes on the DMT sharpener to obtain a good edge versus any other pocket sharpener I have used.

Due to its convenient size, affordability, ease of use, sharpening ability and ease of clean up, I would highly recommend the DMT sharpener to anyone who is serious about maintaining the edge on their knives.  Put this on your prepper check list next to your emergency food storage and bug out bag.  The DMT sharpener can be found on amazon.com ranging in price from $26-35 depending the coarseness you choose.