Let’s cut to the chase. The point of an everyday carry (EDC) knife is to always have a sharp blade just a pocket away (sorry for the triple pun).  And with apologies to restrictive jurisdictions, the choice of an EDC knife is wide open and up the the carrier.  For me, I am an unabashed Benchmade user.  I have a dozen different No products found., and every morning I savor the choice of what blade will ride with me matching my edge to my calendar.  But I’ll be the first to admit that I need to get out more.

Not partying on the town, but enriching my carry options to better understand the the intersection of knife, lifestyle and cutting job. For starters, let me put a finer point on my Benchmade preference by saying that in particular Axis Lock drop point knives really tickle my fancy with prejudice towards those knives that contain artistic elements that prove that No products found. loves me and wants me to be happy. Sadly, Benchmade has it limits and there are other outstanding knife makers in the world that I need to spend more time with.

As I stared at open the Fallkniven PC folding knife in my hand, the first thing I noticed is that it required using a pinch grip or the fingernail groove to open it. Wow. I had not carried a knife that that in years. It was Spyderco that opened my world to something other than nail grooves and thumb studs. The so-called Spyderhole was revolutionary and I carried a Police model, a Delica and a Rescue for years, with a Ladybug and Assist for special occasions. I drooled over any of the pricy Spyderco designs and carried some of them more as pocket art than for their cutting talents since I considered their steel often robust but still pedestrian. But while the Spydercos still required a blade deployment not to far evolved from a thumb stud, which in turn was still in earshot of a fingernail grove, the Benchmade Axis deployment, especially their assist and partial assist won me over. And until now, I’ve never looked back.

I quickly warmed the dual-sided nail notches, and realize that my prejudice towards that type of blade deployment was due to a childhood of chipping fingernails on Swiss Army and Buck knives. And don’t get me started on that Swiss Army knife awl!  But no pocket clip? I could see that the Fallkniven PC was going to be a challenge to my personal paradigm, but I was going to pack the PC everywhere and find out more. 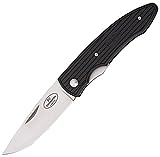 Is That A Scalpel In Your Pocket?

Now that I am many months into carrying the Fallkniven PC, I realize that I may have overlooked some things. It’s a tall order to outperform 154CM or S30V alloys. Super steels are, well, super. But just as the super steels raised the bar more than just a notch or two over the 440 stainless series of irons, Fallkniven’s Cobalt superduper steel has lifted the bar yet again forcing me to reassess my evaluation methods. Imagine using your knife everyday, yet only needing to sharpen it once year or so. Sure that might be a stretch, but the simple fact of considering that possibility required me to rethink my EDC principles since I can noticeably dull a 154CM edge in a single outing.

As I type this I am packing a No products found. as well as the Fallkniven PC. For those uninitiated in the Benchmade nomenclature, the 300 is their first attempt at a flipper. It has a wide but slightly short full-bellied clip point 154CM satin blade with scales graced with three finger grooves of sandstone-colored and textured G10 including the index finger depression supplemented by the flipper trigger. To me the knife has hints of Native American style steeped in early Americana. The layered G10 is exposed like sedimentary rock stratification common to the Grand Canyon or the Morrison Formation in Utah where I love to experience the hostile desert surrounded by dinosaur bones. Yes, the 300 is thick and heavy and expensive and marginally a flipper, but like the Macbook Air I am typing this on, I love using it. So much so that I literally seek out uses to launch it into action.

Superman Is Made Of Cobalt Steel

Fallkniven literally means folding knife, and the PC is Fallkniven’s second version of its P-series folder. Anyone new to the PC folder is understandably stunned into silence by sticker shock. Yet anyone familiar to Fallkniven would be surprised by the low cost of this ubersteel folder with it’s street price barely topping a single Benji. Like Apple Computer, Fallkniven is not interested in the mass market appeal of low prices. Fallkniven is interested in the highest quality, most technically advanced steel blade available on earth. In hindsight, the PC is quite affordable and has a street price much less than most Benchmade Blue Class knives (which are their working “blue collar” blades, not their fancy Gold or tactical Black classes).

Many knives come out of the box “shaving sharp’” but Fallkniven PC arrive “scary sharp.” It was more like a surgeon’s scalpel than a pocketknife. Which the more I think about it, is a good thing. A really good thing. Where the problem lies is that many other knives simply cannot hold such a sharp edge, while the rest simply don’t want to put the time or risk into taking their edge to razor sharpness. Literally, with the Fallkniven PC we are talking the molecular metal limit of sharp steel here. The theoretically maximum knife blade sharpness possible by ferrous metal alloys! To get any sharper, you need smaller molecules.

My Benchmade Mini-Griptilian is a select version with S30V supersteel. I’ve got a lot of miles on it and it performs wonderfully. But head-to-head with the Fallkniven PC, the S30V blade loses a few tenths of a percent of sharpness well before the PC’s cobalt steel does. But of course, sharpness is only one half of the equation; edge retention is just as important. If retaining a razor edge was easy, we wouldn’t be clogging our landfills with disposable razor blades. To kick a dead pun, razor-sharp is barely a comfort when you know it’s a short-term phenomenon.

Although the Benchmade is much faster to deploy through its Axis lock release or thumb stud flick, once both blades are ready for action, the Fallkniven PC is a noticeably more precision instrument. Not that the Griptilian is blunt by any stretch of the imagination, it’s that the PC is more like a tool of surgery and the Benchmade is a little more like a crowbar. Just kidding. The BM mini’s blade is fairly traditional for a folding knife. On the other hand, the PC looks traditional, but cuts far beyond its apparent pay grade.

The PC’s scales do have one flaw I’ve noticed. If you pack the parallel lines embedded within the scales with cheese, it is hard to remove. And frankly, this happened more times than I care to admit since I too was surprised at how much cheese cutting I do in the wilderness.

The Nuts and Torx

The locking mechanism of the Fallkniven PC is a traditional liner lock of spring steel. The knife would probably have to break for the lock to fail. The teflon-bearing blade pivot his held in place by a T10 Torx screw making the deployment tension adjustable, and easy to keep the scales snug against the blade.  The five-bolt stainless steel blade housing is skeletonized allowing for easy cleaning and drying; something very important for a knife that lives among pocket lint. And the black fiberglass reinforced Grilon scales are secured with two T5 Torx bolts in addition the pivot bolt.

As to the lack of a pocket clip, I grew used to the Fallkniven PC in my pocket. If it migrated horizontal, I would simply run my finger along the outer fabric of my pants and return the PC a vertical position snug against the right hand seam of the pocket. With narrow side down, it would generally remain there. And either way, the 2.3 ounces (66 grams) was hardly going to make a pocket dent no matter which way it rides.

At the end of the day, the Fallkniven PC is an exceptional yet simple knife. It rivals my Benchmade 470 in size and look, but the PC costs only half to two thirds as much, has arguably better steel, fewer moving parts, and a stately grace about it that just makes you want to carry it. But If I had to ask for more, it would be for handle colors other than black. Orange perhaps? Seems Fallkniven already heard my suggestion. Before this article even published Fallkniven released PCs with grips in orange, blue, red, military green, with gold highlights, oh, and black.

So before you jump on the tactical train with your EDC blades, give some thought to the grand tradition of high performance in an understated package. There’s some serious blade happiness with the Fallkniven PC.