Between three and four thousand years ago, somebody somewhere thought up the idea of having two opposing bronze knife blades slice towards each other and thus the spring shears were born.  But it wasn’t until about AD 100 that the recognizable X-shaped pivot shears were invented by the Romans.  By placing the pivot point in between the handles and the cutting edges the user’s hand-power could control both the opening and closing of the blades allowing cutting chores to be more controlled and varied.  Massive improvements in scissor design, materials, and capabilities followed rapidly from tiny shears to those that took two hands to operate. In this article, I review the Leatherman Raptor Shears. Keep reading!

Today we have more options than ever from those scissors used in neurosurgery to the familiar gas-powered opposing blades known as “The Jaws of Life.”  There is also a neatly carved-out niche for tactical-medical survival shears, but in most cases the so-named scissors are little more than tough yet conventional kitchen shears.  On the other side of that same coin Leatherman ripped a page out of their own multitool playbook by combining the aggressive chops of military-grade medical shears with the bling of a multitool.  Leatherman produced a ridiculously powerful, durable, and lightly feature-filled set of shears that appears to have no direct competition in the Survival Scissors space.  In essence it is a replay of the early days of Leatherman where the “Multitool” was the only serious contender in its self-created space so prepare yourself for a flood of tactical shears entering the marketplace over the next few years. 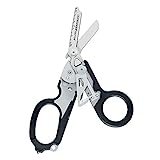 Taking its orders from medical and special ops professionals, the Leatherman’s Raptor Shears have six distinct tools including scissors, a strap cutter, a ring cutter, a glass breaker, an oxygen tank wrench, and a ruler. Limiting these Survival Scissors to six tools is like thinking a hammer only does one thing. In reality, there are so many uses for powerful pair of Survival Scissors that once you have a pair, you will no longer miss the money they cost. And taking a nod from their oh-so successful multitools, these cutters fold up to about half their operational length, and store neatly in either configuration in their matching plastic belt sheath.

The blade steel is Leatherman’s house band of 420HC Stainless.  The high carbon (HC) content of the steel gives these shears the same bite and durability as the rest of the non-supersteel Leatherman tool line.  Of the five tools beyond the scissors I think the ruler is a wash. Five centimeters or 1.8 inches might be handy for reporting a medical situation to higher-ups, but when soloing in a SHTF, the rest of the tools are the real winners.  But let’s start at the top.  The shears are the obvious necessity and whose talents alone make this survival tool a necessity.  These aren’t your grandma’s sewing scissors.  The Leatherman Raptors will cut a penny into a curlycue, or a quarter in half, not to mention anything of lesser material.  The Raptors, like their dinosaur namesake, are a formidable foe for anything they can sink their teeth into.

The strap cutter has the familiar form factor of a stand-alone cutting tool when the Raptor's handles are folded up. The cutter extends out on its  own and forms the rough point on a triangular grip.  Using a liner-lock design, the cutting tool swings from a flush mount parallel to the thumb-side of the scissors into position where the hook faces the user allowing full pulling strength to be applied to the cutting hook.  The position of hook relative to the natural gripping platform provides plenty of confidence and finesse when slicing through the clothing of a victim, or I assume freeing yourself from a tangle of parachute shroud cords.  In my controlled tests, the cutter slices through any non-metal cord that fits into its mouth.  The entire blade seems replaceable but for heavy users of the strap cutter, it might be nice to have replaceable blades like the MUT.

Lord Of The Rings

The ring cutter is a specialty tool designed to slice through wedding bands, engagement rings, and all manner of circular body wear that might create a problem if the appendage constrained by the metal hoop begins to swell.  The ring cutter does not need deployment and sits almost unnoticed tucked into the outside-bottom of the main scissor blades. To use the ring cutter, you simply back up the scissors with blades open until the ring snags the small but hideously powerful cutting jaws.  Then close the shears like normal and “ping” goes the ring. If you do have to use the ring cutter, be kind to the ring’s owner by gently cutting on the side opposite the main attraction on the ring. It will be much easier to repair later.

Rather than waiting for an injury that would cause some swelling to my ring finger, I went ahead and just snipped ring with the cutter to test its effectiveness. I got two words for you: Dangerously Effective.  Don’t even play around with the ring cutter in case you step over the line and accidentally cut yourself into the doghouse.  Unless the ring is stainless steel or titanium, be careful because the ring cuts precious metals like scissors cut fabric.

The Raptor's glass-breaker is a small carbide spike on the finger-grip side of the handles. It points in the opposite direction of the scissor blades and works best, in my opinion, when the Raptor is folded up. That way your hand can wrap around the entire mechanism with the design increasing in width as it heads towards the glass-breaker.  By widening, it reduces the chance you will slip and have your hand go flush with the shattering glass.  Unlike many other add-on glass-breakers, this one, although perpetually deployed, does not seem to get in the way or risk the user much during other chores. It will, however, be a wake up call to your palm if you shove the Raptor in its holster like you do your sidearm.

The oxygen tank wrench is little more than a small roughly rectangular cutout in the shaft of the strap cutter.  While a clever design because the single wrench on this thing can be isolated from the grip fairly well, it is mild survival use given that tanks of oxygen will be as rare as hollow point .223 ammo.  But for the working paramedic, O2 is a daily reality so this wrench might come in handy when running out of hands.  The wrench also doubles as a deployment hole for the strap cutter in the spirit of the Spyderco hole.

As mentioned before, the final feature Leatherman considers a tool on the Raptor is the ruler. Running along the outside of what would be the top or left-side blade (for a right-handed user) is a short but detailed ruler. It is quite easy to read being black marks on a silver steel background, but at less than two inches, it has a pretty narrow use. Plus, the zero point is not at the end of the blade so flush measurements are out. The ruler is better at making sub-five centimeter measurements than those involving inches and their fractional offspring.

The Raptor folds up through the use of two push-button releases found one on each side of the blades just above the pivot point. The triangular buttons are release-in only meaning that if somehow you push a button under stress or pressure, the scissors will not fold up since the handles fold outward only. Therefore the buttons do not take any of the force generated during heavy use.

The comfort of the Raptors is on par with most other shears of this size. The glass-filled nylon grips covering the steel internals of the Raptor do an excellent job of distributing the force across fingers and thumb. However, cutting a penny into a curlicue is not the most comfortable experience, but neither is it something you will do more than once for fun. If you need to push these scissors to anywhere near their limits, you have bigger problems than a little poking pressure on your paw.

The included plastic belt holster holds the Raptor's in either open in a tip-down configuration , or when folded in a grip-down position. When open, the blades stick out through the bottom of the holster with the thumb hole to the front for a natural grab by a right-handed user. Luckily, the holster pocket is reversible on the belt hook so lefties can experience the same deployment success as the rest of the us. When folded, the pocket clip on the shears slides to the outside of the sheath and snaps into place more for easy removal than serious security.

Here are a few things that I wished for when testing the Leatherman Raptor: 1.  A high-visibility version  2.  Electrically insulative handle that would allow cutting up to 220 volt lines  3.  A light mount of some sort (holding a flashlight while using scissors is not the most desirable of situations to find yourself).  Even though scissors only fit one hand, a second hand is almost always required for controlling the workpiece, pant leg, or rope.  It seems Leatherman has addressed the visibility issue and now offers an orange-handled version. I won’t hold my breath for an insulated version, but given that Leatherman has dipped its toe into the flashlight space, I don’t think it too much of a stretch to have a clip or snap-on lighting solution for use in dark spaces.

Survival shears such as the Raptor are not just a great gift for the prepper who has everything, they are also darn close to essential. And the Raptors are one of those wonderful tools that you didn’t know how much you needed it until you have it.

12 thoughts on “Leatherman Raptor Shears Review for 2020: Hands-On for Survi”