What do you get when you put two of the best selling handgun sights head to head?  For me, it is an unparalleled experience.  Adding a holographic red dot sight to any gun is a big step and not a choice that many casual shooters choose.

There are pros and cons to such a step but that is another article.  This one is about the optics , Trijicon RMR vs Vortex Venom. Let’s get to the head to head.

Here is a summary of the sights before we begin:

We first take a deep-dive into the features and specifications, and then take them to the range for a real-live field test.

Vortex optics entered the firearms optics business in 1986.  Vortex is a family-owned, American based company that headquarters in Wisconsin. Initially, the business was a small outdoor retail business, but, with the introduction of their first line of Vortex Optics in 2002, the floodgates opened.  Vortex optics are now a mainstay among shooters not just in the U.S, but across the globe.

The Vortex Optics Venom came to the market to compete with the top-line red dot pistol sights such as the Trijicon RMR.  There is no doubt that Vortex Optics knew the playing field and brought the features to compete.  From the precision machined housing to features such as the top-loading battery compartment, Vortex Optics proved that its understanding of what shooters want is exemplary.

From the shooter’s perspective, the Vortex Optics Venom package is tailor-made for accuracy and versatility.  Power controls and dot-intensity controls are located on the left side of the sight and are recessed to prevent inadvertent changes.  The 1 MOA windage and elevation adjustments ensure the versatility across many distances.  Included with the package is a Weaver/Picatinny mount that weighs in at only 1.6 ounces.

The Technical Side of the Story – Specifications

The one complaint about the Vortex Optics Venom red dot sight is the CR 1632 battery.  The CR 2302 battery is the more popular size of button battery used in most other electronic sights, binoculars, and some earmuffs.  Having to keep a different size battery is a sticking point for some users. 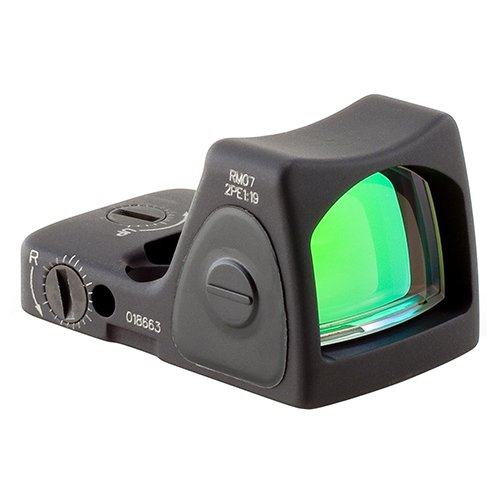 Ask any combat veteran which sight they want on their rifle and Trijicon is almost always near the top of the list.  Trijicon’s reputation for reliability and rugged construction tell the tale.  The RMR Type 2 6.5 MOA adjustable LED sight is a perfect example of Trijicon’s commitment to building superb optics.

Trijicon is probably best known for its ACOG sight, which has proved itself over and over in multiple combat situations as well as with civilian hunters.  The introduction of the RMR pistol sights was marked by a milestone when the Trijicon RMR was named “Optic of the Year” by the Firearms Marketing Group in 2009.

Proven reliability and upgraded electronics are the foundation of the Trijicon RMR Type 2 6.5 MOA red dot sight. Explicitly designed to ride on the slides of modern handguns, the RMR sight features a patented housing design and mil-spec electronics.

Such innovations as push-button illumination control for easy and quick transitions from indoors to outdoors is a hallmark of the Trijicon design.  The RMR sight allows manually adjusted red dot intensity or the built-in automatic compensator will handle the chores as necessary.

For those of you who are Glock or Springfield shooters, a Trijicon RMR mounting kit adapter purchase is necessary to mate the RMR mounting system to either the Glock MOS system or the Springfield QSP pistol.

The most voiced complaint about the Trijicon RMR red dot sights is the bottom battery compartment.  The sight must be unmounted to change the battery.  The long battery life mitigates this problem to a certain degree, but for a gun meant for use in combat situations, this seems to be an oversight. 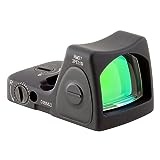 On To The Range – The Real Test and Impressions

The real test of any gun accessory, especially sights and optics, is in the shooting and testing.  I suppose to be really accurate, we should have had identical guns on which to mount our test sights, but what we had is what we shot.  In this case, the platforms were a Glock 19 fitted out with the Trijicon RMR and a Canick mounting the Vortex Venom.

I put about 200 rounds through each pistol at identical distances onto standard silhouette targets.   The test drill was to fire a sequence of 50 rounds of timed accuracy shots.  I then moved to targets that ranged from 7 to 25 yards.  The targets were engaged in various sequences that required acquiring the targets at different distances in different orders.  My goal was to test how well each red dot optic allowed me to compensate for recoil, muzzle bounce, and moving from target to target.

My Impressions – Getting the Feel

The initial 50 rounds proved to me that both of these sights in the hands of a semi-skilled shooter (like me) can make an unbelievable difference.  Either one of these sights makes a considerable difference in the ability to maintain a sight picture and to bring the red dot back onto the sight after a shot.

I was afraid that after shooting for many years with open sights, the transition would be difficult.  It turned out to be not as big of a transition as I thought.  I will say that I usually shoot a pistol with both eyes open, so that may have made it easier.

To my 66-year-old eyes, there was no discernible difference in the sight pictures through the glass of the optics.  Someone with younger, more acute vision may be able to see a difference but for me, there was none.  Both sights offered clear fields of view with no distortion or glare.

The next round of shots required that I move from target to target set at various distances.  Moving between different distances required not only reacquiring the sight picture, but refocusing on targets at different distances as I moved.  Here, the Vortex Venom sight gained a small advantage.  The slightly larger field of view allowed me to find the target faster and get the dot where it needed to be with less trouble.

What I Didn’t Test – Durability

Suffice it to say that financial implications kept me from testing what could be a deciding factor in a sight that might ultimately be used on a combat handgun, the issues of durability.  Testing these two sights to failure in drop tests just wasn’t an option.  However, just looking at the two sights, I have to give the edge to the Trijicon.

I also have to judge based on reputation.  Trijicon has a record proven in combat.  Trijicon is a supplier for the military. Their sights have been in combat all over the planet since their introduction.  The reputation among warriors who have used these sights is well known.

The Trijicon looks more robust and seems to be a bit more heavily built.  I suspect that this would have a significant advantage over the Vortex in a drop test. If durability and ruggedness are something that you must have, the Trijicon probably is a better choice.

The Downside for a Pistol Optic (My Opinion)

As good as they are and as helpful as they can be, there are certain shortcomings to mounting an optic on a pistol meant to be a concealed carry firearm.  The addition of that optic on top of the pistol creates some challenges.

On the other hand, if you are a regular participant in the various pistol shooting competitions that allow red dot sights, there is a distinct advantage to mounting a sight on your favorite handgun.

The other gorilla in the room is the cost associated with the sight and the mounting.  Many pistols are not factory equipped with mounting holes or they use a proprietary mounting system that requires adapters to mount the Trijicon or the Vortex.  These are all added expenses that you should consider.

All said and done, my recommendation for the average shooter who wants to mount a red-dot sight on their favorite pistol is the Vortex Venom.  For the price, most shooters will never be able to tell the difference in the performance of these two sights.

On the other hand, if you are law enforcement or involved in any other job where you may experience combat conditions, the Trijicon is the obvious choice.  When your life may depend on your equipment, you want the best and tested option. I hope this look at the Trijicon RMR and the Cortex Optics Venom sights has helped you gain a better understanding of how these two exceptional optical systems stack up against each other.  If you have comments, observations, or experiences you would like to share, please make use of the space below in the comments section.

A life long hunter, fisherman, and outdoorsman, after surviving a devastating tornado in his home town, he saw the effects on people's lives as they struggled to cope. He built his first bugout bag a few weeks later and has been a dedicated prepper/survivalist since that time. After a career as a fireman, Dennis opened a retail store (FFL approved) catering to the military, law enforcement, and like-minded individuals. The store built their own AR platforms. Furthermore, Dennis was also an NRA instructor in both long gun and handgun as well as a certified range safety officer. Read his full interview here. Read more of Dennis's articles.