In the Mid 1990’s, Mel Parry, a Warrant Officer QGM, and a veteran of the well known 22nd Special Air Service Regiment (British SAS) saw the requirement for a new generation of professional blades that could replace the legacy of survival tools that had been standard equipment for decades.

Mel Parry knew that these professionals deserved something better.  Collaborating with both service members and retirees from elite special forces throughout the world, he began to design what would be recognized as a breakthrough in both functionality and quality of manufacture.  This breakthrough took the form of the Perry Blade in 1995.  Unfortunately due to various commercial considerations the production of the Parry Knifedid not proceed after 1995 as planned, and therefore a period of some 13 years has elapsed since the current model, incorporating a number of improvements over its predecessor was re-introduced in 2009.  The knife is hand crafted in Sheffield, England by Samuel Staniforth, a cutlery maker since 1864 and acknowledged as producing the finest knives available, being part of an industry that was first established over 700 years ago.  The knife is fairly simple in design with a bellied Bolo/Bowie type clipped blade with a serrated back edge, and finished in a black Dupont Teflon coating. However, on closer examination the knife offers several different cutting edges and holds, making it extremely versatile. 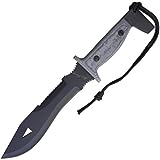 stainless steel. The main cutting edge is bevel-ground for strength, whilst the deep belly shape takes the weight forward, in the manner of a Khukri, giving the knife a powerful chopping stroke. The point looks clipped in shape but is ground to provide a spear point that accentuates its use for prying /levering and digging. Also near the choil is a hollow-ground section which is honed to razor sharpness for fine cutting and whittling, ideal for making fire sticks The serrated edge on the spine of the blade provides for a sawing action capable of cutting rope, webbing or gristle. The knife is of a full tang construction, with black linen micarta screwed to the tang providing for ease of replacement, resulting from either wear, damage or the choice of an alternative grip to be fitted.

paracord around the handle, this provides some 2m of cord for use in either a survival situation or correspondingly as a means of restraint for when the role is reversed to one of combat.

The knifeis also designed with relatively short guards so that one can choke up the grip for fine work, with the ricasso being extended and having linger grooves to make the choke grip firm and comfortable. The steel butt is squared off on two sides so that it may be used as a hammer in either direction, the flats being file-cut to reduce the tendency for the face to skid off the work on striking. The butt also incorporates a lanyard hole for additional security of retention of the knifeas well as a means of securing the paracord, should this option be selected as an additional survival aid.

From the SurvivalCache Team

Review by Josh (The Survival Kid) and Jay amazing hair shaving edge.  I took the plunge, quite literally, and was amazed to see the Brute penetrate a ⅛” thick piece of annealed and laminated sheet steel.

Immediately after the penetration test I tested the Brute’s food prep capabilities.  At 9” long and ¼” thick the Brute is no tomato slicer, but it chopped melons, sliced apples, and spread peanut butter like a pro.  As far as a combative tool goes, the Brute is excellent.  Normally on a knife of this size the center of balance is a few inches forward of the hilt, but because of the s-shaped blade the weight can be balanced at the hilt while still being a formidable chopper.  The handle is amazingly engineered so that the users grip can change from the chopping position, to the stabbing position, to the carving position.

The double choils are another engineering feat.  In order to obtain uniform testing results, we tested the Brute’s chopping power on ordinary pine 2”x4” boards.  We tested the Brute against a full size machete, and a 1 ¼ lbs. hatchet.  In 30 seconds the Brute out chopped the other cutting implements by quite a bit.  The Brute excelled in the battonning department as well, I was very surprised by the fact that the serrations did not interfere with battonning at all.

My first impression of the saw back was that it would detract from the utility of the knife as usually is the case with saw backs, but this was not so. The saw back is designed for cutting the bones of animals to extract marrow for soup, not for wood cutting. The saw does not saw straight through bone, but rather scores the bone so that it can be snapped cleanly. I would like to comment on the integrity of the blade’s finish. The finish held up fantastically through all of the wood cutting, but was scratched up some during the penetration testing.

I really like how robust the knifeis.  It feels like it belongs in your hand, and I doubt that I would

have difficulty using it for extended periods of time.  The knife also has several key features that I liked including a lanyard, handle designed for wrapping parachord around it, full-tang construction, and the steel butt of the pommel that can be used as a hammer.

One of the things that I like about the knifecould also be its potential down fall for some users. The

word “robust” is a very fitting description for this knife, it may be difficult for people with small hands to use this knife for extended periods of time.  Also, the sheath that is included with the knife is rather bulky and does not hold the knife as securely as I like.  Snapping the handle strap of the sheath is also difficult when the sheath is new but became easier as I broke the sheath in.  I also tried the leather sheath which is an option for this knife and was quite impressed.  Another drawback is the price, at over $300 it is not a cheap knife, but you definitely get what you pay for as far as quality goes in the knife itself.

When I first saw a picture of the Parry Blade, my first impression was that it was another “Rambo

Knife” gimmick. This is not the case. It is a very well thought out knife.  If you have been meaning to get a good survival knife for a while, then this is the one to get.  My Kershaw Outcastjust went on ebay, the Parry Blade is the new survival knife in my Bug Out Bag.

We also found a review of the Parry Blade by Australian Hunter Magazine – (Click Here) to see the article.  We want to point out that this is a very rare knife “Made by Survivalist” for “Survivalist” and because this knife is hand made with a very limited run, it is priced accordingly.  This knife is not massed produced or widely available and does not enjoy the backing of a large corporation.  This is a labor of love produced by a small group of “knife guys” in England.

Extract from James Marchington’s book “The Encylopedia of Handheld Weapons”
….“I first handled this knife at the COPEX show in 1995 and was immediately impressed with its heft and handling.   It is a true working tool, designed by people who use knives professionally and know what is needed in a combat survival knife.   I was told that the knife had been selected for Richard Branson’s attempt at a round-the-world balloon flight, and that several special forces units had shown interest.   At the time of writing, however, the knife has not gone into production and only a few pre-production models exist.  With the current British political climate, it is doubtful whether the Collins/Parry Knife will ever become widely available, which would be a loss to military and civilians alike.”