The SKS rifle served the Russian military for many years. When the SKS was superseded by the AK47 in the 1980s, a horde of surplus SKS rifles came onto the market. At the time, these rifles were plentiful, cheap, and quickly became popular. Many shooters adopted a homeless SKS rifle and continue to shoot these workhorse firearms. Most shooters want to mount a scope like any high-caliber rifle used for sporting purposes. The question arises concerning the best rifle scope to mount on an SKS rifle.

The SKS rifle is a semi-automatic carbine based on the Russian Siminov system. Chambered for the 7.62×39 cartridge, the SKS rifle manages supersonic speeds to about 400 yards. At about 400 yards, the bullet drops subsonic and behaves erratically, causing accuracy problems. These rifles make excellent sporting and hunting rifles at a reasonable cost.

Thousands of Russian and Chinese manufactured SKS rifles have been imported into the United States. Many are routinely used for hunting and target shooting. A large aftermarket industry in upgrade and enhancement products has grown around the SKS platform. Hunters especially want to mount a suitable riflescope on their SKS and wonder about the best scope solution.

Choosing a Scope for an SKS Rifle

When it comes to choosing a scope for an SKS rifle, there are several considerations. We used our usual criteria for purchasing a riflescope to look at possible choices. We tempered these factors with the truth about the SKS rifle. The SKS rifle is an inexpensive, surplus, military-grade rifle chambered for an intermediate cartridge.

These are the basic criteria that we used to select the riflescopes that appear on our list. Other factors may affect your decision. You must make a choice based on your preferences and expectations. Now, on to our choices for the best riflescopes for an SKS rifle.

If you have read many of my articles, you should know by now that I am a huge fan of Vortex Optics products. I think that Vortex sells some of the best rifle scopes for the price you can get. It should come as no surprise that my choice for the Best Overall Hunting Scope for your SKS rifle is the Vortex Optics Crossfire II riflescope.

The Crossfire two features a 1-4X magnification range. This may seem a little underpowered to many shooters. Most hunting in the US happens are rangers of less than 200 yards. A 4X magnification is more than adequate at these ranges. Considering the other features you get with Vortex Optics riflescopes, this is a gem.

Fortunately, you won’t need to break open your piggy bank to afford the Vortex Optics Crossfire II riflescope. Typically, you can find these riflescopes at a street price under $200.

Riton Optics is a relative newcomer to the sporting optics market. However, their product line has garnered a lot of attention from shooters. The quality of their optics and their customer service has put them in the crosshairs of many shooters. The Riton Optics X1 Primal 3-9X40 riflescope gets them a spot as the runner-up best overall hunting scope for an SKS on my list.

The Riton X1 Primal gets you more magnification than Vortex Optics Crossfire II and a bigger objective lens. In theory, the larger objective lens will transmit more light and give you a sharper image. Riton doesn’t short you in the features department.

Riton holds the line on price and provides a good quality scope. A bit of judicial shopping will often score you a brand new Riton X1 Primal scope for less than $150. 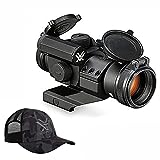 The Vortex Optics StrikeFire II Red Dot sight fits the bill for hunters who prefer a red dot sight. The Strikefire II offers the features for which Vortex Optics has become noted. In addition, you get the benefit of the Vortex Optics no question asked warranty.

One great advantage of a red dot sight is the ability to acquire your target and place the dot with both eyes open. This style of shooting and aiming has advantages in allowing a wider field of view and maintaining peripheral vision.

If you want to step up your SKS rifle scope to a first focal plane scope, I suggest looking at the Monstrum G3 1-6X24 riflescope. Monstrum is a good mid-range riflescope with features that you often don’t find on scopes costing much more. Monstrum scopes won’t compare with Leupold or Trijicon, but these scopes make a good fit for the average shooter for your SKS rifle.

While Monstrum is not at the top tier of rifle scopes, no one expects to put a $2,000 riflescope on a $500 rifle. Even at a modest price, Monstrum delivers good performance and a list of features that is not to be dismissed. 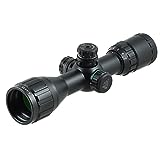 If you are on a tight budget but still want a decent scope for your SKS rifle, take a look at the UTG 3-9X32 BugBuster rifle scope. In the realm of budget scopes, UTG has become a standout. Leapers, the UTG line of scopes manufacturer, offers a wide range of scopes in various styles. The BugBuster seems to have been designed with the SKS rifle in mind.

You won’t find many scopes that offer the features, quality, and durability of the BugBuster scope for less than $100. Yes, this scope is manufactured in China using Chinese optical glass. However, Leapers maintains tight quality control and offers excellent customer service on their products. Check out what you can expect to find in this UTG scope.

If you are a budget-conscious hunter who wants a reasonably priced riflescope that delivers a higher quality of performance than the price suggests, you should consider the UTG Bugbuster rifle scope for your SKS.

The Mystique of the SKS Rifle

The SKS rifle has a certain mystique with shooters. It is by no means considered a beautiful rifle. The manufacturing, by most western standards, is almost crude. The stocks are not crafted from high-quality woods, and the metalwork is often described as utilitarian. There is no mystery about this. The Russian arsenal industry intended to produce reliable and durable firearms without much regard to looks.

There is no doubt the Russian arms manufacturers achieved their goals. These rifles are great upgrade firearms from the ubiquitous .22 rimfire rifles. The 7.62 rifle round can bring down most North American game animals. Many deer hunters routinely shoot SKS rifles. These imported rifles are easy to maintain, quick to disassemble and clean, and operate reliably under the most miserable conditions.

The price of an SKS rifle has risen sharply over the past few years. When the rifles first appeared on the American market, they were cheap. At that time, you could purchase an SKS rifle that looked like it had never been fired or handled for under $100. Today the same rifle can be found for between $400 and $1000 based on the manufacturer and the condition.

The SKS As a Hunting Rifle

Before you take your SKS into the field on a hunting trip, it is best to have a little understanding of the characteristics and performance of the rifle and the cartridge. In many ways, the SKS rifle makes a good intermediate-range hunting rifle. On the other hand, the SKS design does have some inherent disadvantages that must be considered.

Advantages of the SKS Rifle

It is easy to create a list of reasons you should consider buying an SKS rifle as an intermediate-range hunting rifle. These reflect what we hear from others who routinely use the SKS as their primary hunting firearm.

Disadvantages of the SKS Rifle

On the other hand, some things about the SKS rifle may be a barrier for some people. These are the most often mentioned among the downsides that many shooters find about the SKS.

Which is the Best Rifles Scope for Your SKS?

The answer to that question really lies with you. Your preferences, hunting habits, and expectations should always be the deciding factors in any riflescope choice. My selections are based on what I look for in a scope, how I expect to use that scope, and my expectations of the scope’s performance.