LifeStraw vs Sawyer Mini Water Filter – Which is better for Survival?

We need water to survive but the water that we encounter while out in the bush can be contaminated with bacteria and protozoa that will ruin a trip real quick. If in a survival situation  then the versatility and functionality of our water filter becomes a matter of life and death.

With so many water filters to choose from it is difficult to find the right one. I personally own both of these filters but by the end of this comparison you will see that there is a clear winner in this showdown which is why only one of them is my go to filter system.

Both the LifeStraw and the Sawyer mini are hollow fiber membrane filters and they share a lot in common and both do the job of filtering water to render it safe to drink. While they both perform well with their intended tasks the differences between these filters force them into specific roles and leave only one of them the preferred choice.

The Sawyer Mini and the LifeStraw are both hollow fibre membrane filters which have pores in the walls of the hollow fibres that do not allow anything larger than the pore size through. This is why these filters have such a long lifespan because they do not require any filter media to purify water. This comes with the drawback of not filtering viruses, chemicals or heavy metals but will block most bacteria and protozoa from continuing through to the clean end of the filter.

The feature of being able to drink straight out of the potentially contaminated water sources is a big selling point with both of these filter options. The option of drinking from any source while on the move is beneficial because you do not have to wait for your water to either boil or work its way through a gravity filter or being pumped through the usual filter systems that you’ll often see while on the trail. Either of these filters would be good for a tactical or bug out situation where getting water at any and every source would be key. 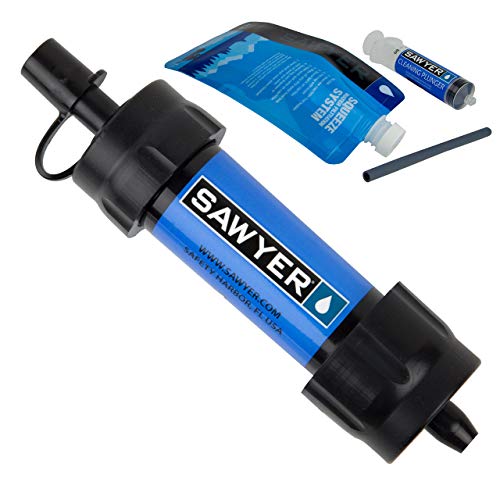 The Sawyer is able to not only drink from the water source by sucking water through the filter but it has been designed with a threaded end that will allow, not only the provided water bag to be screwed on to the filter end, but also most disposable soda and water bottles as well. An included back flushing syringe is a good feature because it allows the user to take clean water and force it back through the clean end of the filter which blows water and debris out of the threaded dirty end. This essentially extends the life of this filter to indefinite as long as the majority of the debris and dirt is back flushed out of the pores in the hollow membrane. This filter is rated to filter 100,000 gallons of water over its lifetime which at a gallon of water a day is almost 274 years of filtering life, so if cared for it will last a lifetime.

LifeStraw is designed to be very simple to operate and is built around a similar method of filtration as the Sawyer Mini and operates in basically the same way. Dirty water is drawn through the hollow fibre membrane and only clean water and anything smaller than 0.2 microns is able to make it through to the clean side of the filter. The LifeStraw is not able to fill containers because it is designed to be used as a straw, however, you could fill a container with dirty water and drink through the LifeStraw as a method of filtering your water.

The filter is rated to filter 1,000 gallons of water but has no official way of back flushing like the Sawyer. To operate the LifeStraw one needs to forcefully suck water up through the filter repeatedly until the filter is primed by wetting all the hollow membranes. After this initial priming the filter can be used just like a normal straw just with a noticeably slower flow rate. After using the LifeStraw it is good practice to blow air back through the straw to clear out any dirty water.

If the LifeStraw has ever been used then it too must never be allowed to freeze. Since it has the same hollow fibre membrane system that the Sawyer Mini does it will react the same if frozen whit water inside the filter.

Differences Between Sawyer vs LifeStraw

The main differences between these two filters comes down to service life, pore size and functionality. While they both allow you to drink directly from a water source only the Sawyer Mini can also be used with hydration bladders, the included water bag, and disposable water bottles.

The clear winner in this showdown between the Lifestraw vs Sawyer Mini is the Sawyer Mini.

The Sawyer Mini can do everything that the LifeStraw can do but, it filters more out of the water, lasts longer, needs no priming, can be cleaned, and packs down into a more convenient and less obtrusive size for stowing in a pack or pocket. The ability to attach inline with hydration bladders and to screw on a disposable water bottle is such a handy feature that the Sawyer Mini absolutely decimates the LifeStraw in a head to head showdown.

Michael is a survivalist, traditional bowhunter, student of traditional and primitive skills, as well as a veteran of the Canadian Armed Forces. He is also a husband and father and makes his home in British Columbia, Canada. Read his full interview here.